Rise of the mega blogs? 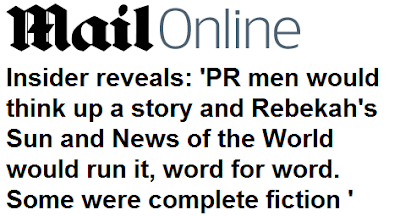 It is a given that a strong, healthy media is vital to the proper functioning of a democracy. It is also a given that we no longer have a functioning democracy in this country and, as each hour passes, it becomes more and more evident that we have a media that is far from healthy.

The article to which we have linked (headline illustrated) relates to the Sun and the News of the World, and I can certainly attest to the veracity of the claim about stories being invented, from my own personal experience – with senior journalists in The Sun knowingly publishing stories that were not true.

But the malaise does not extend solely to open falsehood. As we have so often remarked, the distortions arise as much from what is not published, and the framing of the stories that are. Add to that the deskilling of much of the media operation, and the increasing reliance on copy and paste journalism, and we have an industry on its deathbed.

The link on framing, however, relates to a book by Stephen D Cooper, called Watchdog – Bloggers as the Fifth Estate, and it was he who sharpened up the idea that the most powerful force keeping the media honest was the political blogosphere.

This is undoubtedly the case in the United States, but for many reasons, the blogosphere in the UK has been less effective – not least because of the emergence of the corporate blog, or "clog", matched by a determination of the media and the political claque to freeze out the independents.

Now, it seems, we are supposed to be under even greater threat from the so-called mega-blogs, according to a new recruit to one of the same, a man by the name of Ed Staite.

Looking at the list of "bloggers" recruited to the two extant "mega blogs", one sees corporates, media and politicians well represented, but no one so far that could truly be described as an independent blogger. The voice of the "ordinary man" is being drowned out.

The great problem for the independents is that their greatest strength is also their greatest weakness – their very independence. The corporate drones, pols and other dross that infests Huff 'n' Dale will readily allow themselves to be marshalled and corralled. And they do not need an editorial line imposed. Being largely bubble-dwellers, they tend to think and write the same.

On the other hand, organising the independents makes herding cats look like a gentle stroll, while the one recent attempt seems to be going nowhere. The great British public seems happy to be led, rushing to the corporates, and feeding in their comments, needing little encouragement to ignore the independent blogs.

Perhaps the truth is that in Britain, there is no room for an independent sector. The British people, far from being independent-minded, and freedom-loving, actually tend to be servile, compliant, easily led, gullible, and easily pleased. After all, while we had in the NOTW and Sun two newspapers that made up stories, we also had the two most popular, with the highest circulations. Crap obviously sells.

Perhaps 'ed state has got it right, and Huff 'n' Dale are the future. Above all else, getting down to their level, in order to be really popular, is something most of us independents will find it near impossible to achieve.