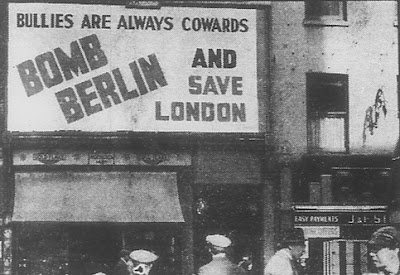 Europe's second bail-out for the crisis-hit Greek economy risks undermining the foundations of the European Union, the president of Germany's Bundesbank has warned. And the picture was taken before photoshop was invented. It's real, and was seen as a solution at the time. An anonymous donor paid good money for the street advert, "somewhere in London". It wasn't an answer.

It has to be said, though, that our masters are driving us in the same direction and some might think that a repeat is called-for. When the euro finally goes belly-up, and the EU with its gods off multiculturalism falls apart, there are a lot of people who will turn to violence, as their idea of a solution.

So what do we make of the Norwegian killings? In an outwardly calm and civilised country, still waters run deep. Is this a "nutter" running amok, or is there something more to it? Is there something in this society of ours that is driving apparently rational people to take such extreme measures?

But ponder if you will – even the perpetration of the most extreme violence can be made to seem a rational act. The decision to bomb Dresden was taken by officers of the Crown, sanctioned by a prime minister, and carried out in good faith by brave, sincere and dedicated people. Whether killing is permissible, therefore, depends entirely on context - not on the act or the consequences.

We look upon those same people differently now, and ask how they could have killed people on an industrial scale - innocent women and children amongst them. Should we be looking at Anders Behring Breivik, and ask ourselves what made an intelligent and educated man take the action he did? Or are we to dismiss him as a rabid, extreme "right wing" madman and leave it there? Should we ignore his manifesto and pretend it didn't happen? Until the next time?

On the other hand, we could look at related events in the wider context, analysing them not only for what they are, but what they might be and what they might provoke. There is no excuse for violence, the sages might say. And that might be true. But there are often reasons - and of those we need to know something. Certain acts might be wrong, but some of the thinking behind them might be sound.