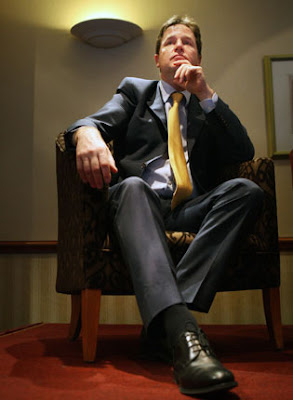 Nick Clegg says in The Independent that the "pillars of the establishment are tumbling", not perhaps understanding that, as deputy prime minister, he is one of those "pillars".

Amazingly, instead of looking for the nearest bunker and hiding in it, Clegg tells The Independent that he believes the NOTW "crisis" offers an opportunity to clean up Britain's "rotten establishment". "The anger people feel", he says, "is almost palpable. The question is how we harness that sense of outrage to build something better for the future".

This is a man who really doesn't get it. He is so unreal that only one trapped in a fantasy life could exhibit such a delicious lack of self-awareness. He can see what is going on around him, but finds it impossible to apply his own observations to himself.

An almost exact mental equivalent would be a concentration camp guard condemning his colleagues for being part of a brutal regime. The lack of connection is that absolute, for a man who has to be driven around in a £300,000 armoured limousine to ensure his safety.

Clegg is trapped in a bubble of his own making, within the larger media-politico bubble – a double bubble, so to speak. From that, there is no escape. He will go to his grave transfixed by the very ignorance that he has on display today.