The least he can do 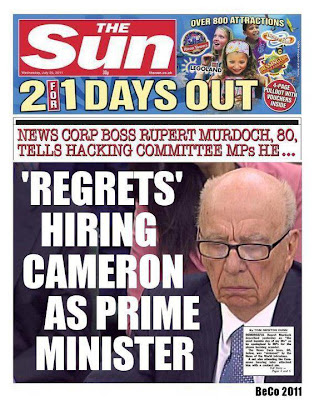 Alongside the euro, what should be front page news in the comic section (the bit round the business news) is this.

According to the Office for National Statistics, public sector borrowing topped £14 billion in June, higher that £13.6 billion borrowed in the same month last year. Therefore, despite Osborne's promise to cut the deficit (but not the national debt), we are looking at a year-on-year increase.

The ONS is saying that last month's poor figures stem from an increase in public spending of £2.3 billion, against the previous year, while receipts grew only £2.1 billion. What price "cuts"?

Baby Osborne and his mate little Dave are now going to have to screw down borrowing, chopping at least £2 billion a month out of the system if he is to come inside this year's target of £122 billion. Yet even that is a soft target – it means the deadly duo are "only" going to increase the national debt by £122 billion, if they meet their target. And now, the chances of doing that are vanishingly small.

The last time I wrote in this vein, incidentally, it was in terms of observing the unreality. Given the growing detachment of the Scumset from even their brand of unreality, perhaps we should be petitioning Murdoch to change the man pretending to be our prime minister. Since he runs the universe, that is the least he can do for us.

Yet, in terms of his "flagship" newspaper (the one hiding behind the firewall), all his writers can manage for a lead is the legend "Eurozone leaders pulled the single currency back from the brink of disaster last night as they agreed a second plan to bail out Greece and ambitious proposals to overhaul the embattled euro area".

They haven't really. All the "colleagues" done is "parked" the issue long enough for them to get away on their hols (they hope). The stitch-up will unravel in the early autumn, if not earlier - and it's going to be a long, hot summer in Athens.