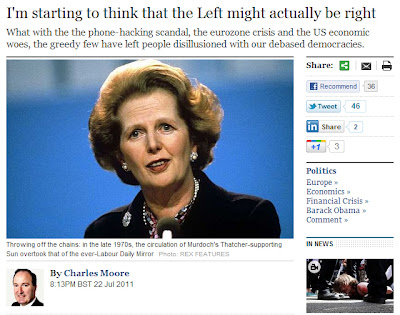 It would be easy to dismiss Charles Moore where, in his latest piece he asks: is the Left right after all? In fact, it is incredibly easy, because the man is actually picking holes in what the Right calls "the free market", which the Left thinks is actually a set-up.

More to the point, despite the startling title, this is an incoherent piece which, as far as I can see, leads you up the garden path but does not really take you anywhere. Is the man saying that capitalism is wrong, or simply does not work? Is he complaining about a failure of democracy, or what?

That apart though, the fact that the question is even asked is intriguing. All is not well in the mind of Moore, and the man is struggling with the idea that some of his long-held beliefs might be flawed – or even wrong.

But that is as far as he goes. What the man fails to see is that we have neither democracy nor a free market. The dominant forces in this society are statism and corporatism, where – as always – the ordinary people have very little say in the way the nation is run, or the nature of goods and services provided.

In all sorts of areas, we have to take what we are given, at a price decided without any real market influence. And if you don't like it ... tough.


In its stupidity, narrowness and cruelty, and in its methods, the paper was a disgrace to the free press. No one should ever have banned it, of course, but nor should anyone mourn its passing. It is rather as if supporters of parliamentary democracy were to lament the collapse of the BNP.

It was a great day for newspapers when, 25 years ago, Mr Murdoch beat the print unions at Wapping, but much of what he chose to print on those presses has been a great disappointment to those of us who believe in free markets because they emancipate people. The Right has done itself harm by covering up for so much brutality.

And there lies our conundrum. If the owner, Mr Murdoch - champion of the Right - turns out to have feet of clay, where have we left to go? That question is unanswered, and the lack of an answer adds to the incoherence of the piece. But if Moore is struggling for answers, so are we all.

What this possibly indicates, though, is that all the old certainties are disappearing. That itself is a form of progress. We might actually be getting somewhere.