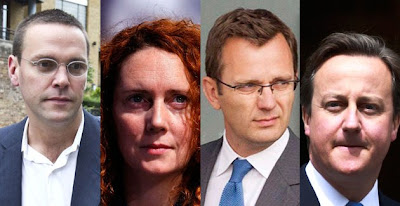 That the dregs of "Fleet Street" such as the News of the World should behave like the dregs, is like, er ... wow, amazing (not). That The Sun should be the scum is one of those "well I never" moments. Much lauded for its skill in brevity, that latter journal made up for what little skills it did exhibit by a diet of distortion and inaccuracy.

One would expect, therefore, that the political establishment might rise above the scum – dealing with it at arm's length and treating it with some reserve and even disdain. That is what is different about this tawdry saga, in that it reveals the fact that the two are one and the same.

Thus we have The Independent - and most others – reporting on the scale of private links between David Cameron and News International.

The man masquerading as our prime minister has been shown to have met Rupert Murdoch's executives on no fewer than 26 occasions in just over a year since he entered Downing Street.

Furthermore, the ghastly Rebekah Brooks is the only person Cameron has invited twice to Chequers, a privilege not extended even to the most senior members of his Cabinet. James Murdoch, News Corp's chairman in Europe and the man responsible for pushing through the BSkyB bid, was a guest at the Chequers eight months ago.

And the former NOTW editor Andy Coulson – who was arrested this week in connection with police corruption and phone hacking – was invited by Cameron to spend a private weekend at Chequers as recently as March.

Far from treating the scum with disdain, our politicians seem to revel in its company, indulging in mutual recto-capital insertion to a degree which would scarcely seem possible or safe. It really does invite the observation that merd of a feather sticks together. Dregs shall speak unto dregs – they are one and the same.

The only thing that saddens is the number of people, some quite intelligent and sound, who have been taken in by this motley shower. Instinct - very quickly backed up by fact - told us that Cameron and his "set" were not people of any worth. We did say so right from the beginning. Now, too late, the sad truth is dawning more widely.

This is a Soylent Green moment - "David Cameron is scum". The sooner he is gone the better.