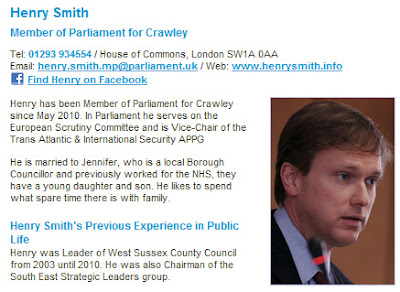 In the tradition of Madame Defarge, we continue to record the 274 MPs who gave away £9.8 billion of our money with their votes. This one, though, is special. He is Henry Smith, a Conservative (In Name Only). His facebook profile is here.

What makes Mr Smith different is that, this morning, he e-mailed to tell us he had noted that he was listed on EU Ref as supporting the increase in IMF lending capacity. But, he wrote: "This is not the case and I would be grateful if you would amend your website accordingly". He then referred us to the Guardian content partner, which lists Mr Smith as a "rebel", having voted against the increase.

Reluctant to take ConHome as the source of record, however, we checked back with Hansard, from where we had acquired the list in the first place. And there, he was and is still listed in the "ayes". But, to our surprise, we found that he was also listed in the "noes".

We wrote back to Mr Smith, telling him that he was listed as having gone through both lobbies. Was there a Henry Smith doppelganger ... or was this a case of identity theft, we asked. The reply, interestingly, came swiftly. "You are quite right, yes. To abstain on a vote one can go through both lobbies", Mr Smith wrote.

Thus, our egregious Mr Smith had not supported the increase, but neither had he opposed it. He was not a "rebel". He had abstained.

That then led me to write back asking him if it was not a "tad disingenuous" to point me in the direction of Conservative Home "which indicates that you opposed the measure". That, by your own account, I observed, "would seem to be less than the whole picture".

Believing that the ConHome site would be anxious to amend their misleading record, I then left a comment on their site, pointing out Mr Smith's duplicitous voting behaviour. But, despite gentle probing from my colleague, the comment has not survived moderation and Mr Smith is still listed as a rebel. One can only admire the dedication to truth and accuracy.

On the basis of Mr Smith's behaviour, however, I am not inclined to remove him from Madame Defrage's list. Technically, he may not owe us his portion of the giveaway, which we assess at £36 million, but he has shown himself not a man to be trusted. He can, therefore, now consider himself Noted By Madame Defrage (NBMD). The knitting grows longer.