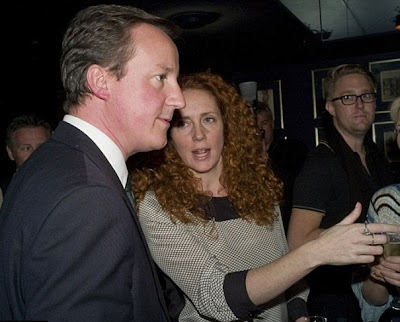 Had Cameron any convictions or balls, writes one of our commenters, he could easily point out the monstrous leftist humbug at work here.

Not long ago the very same duo of Sad Old Trots, the Al-Beeb and the Grauniad were treating Julian Assange as if the second coming had happened, for dealing in stolen/hacked state secrets from the US whose publication put many lives in danger, from regimes that think nothing of bumping off opponents after prolonged torture first.

Yet when Murdoch's hacks are caught doing the cyber equivalent of nicking an open briefcase off the backseat of a car with all its windows left wide open in Moss side, it's as if Beelzebub was stalking the land eating our children.

Autonomous Mind had it straight away. This is all about stopping Murdoch turning Sky News into a UK Fox News and preserving the Al-Beeb/Graindiad stranglehold on political debate.

From a political perspective though, this is - or should be - mainly about the judgement of Cameron, the man masquerading as our prime minister, who chose as one of his most senior and trusted advisors a man who was arrested this morning in relation to investigations of police corruption, along with former NOTW royal editor Clive Goodman.

It should be about the judgement of a politician who is far too close to the tawdry end of the press business, and makes up his policy on a whim, without principles or intelligence, concerned more with how he looks than what he achieves.

Nevertheless, some uncomfortable questions are now being asked about the role of the media, with Nick Cohen in The Spectator accusing the managers of the British media have a pimp's morality. He has a point, although it is a bit rich coming from the Spectator which is one of the premier brothel keepers to which Cohen refers.

Andrew Gilligan also writes about the fate of the press, concerned that the effect the mob-enforced closure of the NOTW is to threaten press freedom. This man is a halfway decent journalist, but again his choice of platform weakens his case. Of those newspapers which have contributed to the loss of respect for the media – and thereby weakened it – the Failygraph must rank close to the top.

With perhaps more justice, Brendan O'Neill of Spiked-online worries that a "public institution" patronised by millions of people, has been wiped from history. This, he writes, is not as a result of some jackbooted military intrusion or intolerant executive decree or coup d’état, but under pressure from so-called liberal campaigners who ultimately felt disgust for the newspaper's "culture". History, he says, should record yesterday as a dark day for press freedom.

Actually, they all doth protest too much. I never read the NOTW and very rarely looked at its website - for very good reason. I will not miss it. It always was a crappy rag, and as the rest of the media got caught up in the race to the bottom, it simply became crap amongst crap. The media and its apologists over-rate themselves if they think that anything worthwhile has been lost - or that there is much worthwhile left to lose.

What has been gained, though, is an insight into a sleazy, low-grade nexus between politicians and the media, although it merely confirms our opinion of an industry and a calling that could hardly get lower. Long before the NOTW started on its current path to destruction, the media had become brothel-keepers and pimps, alongside their political friends whose values they share.

Standing outside the bubble, we can only wish a plague on all their houses. We could lose the whole damn lot of them and we'd be none the poorer.