Close down the blogs 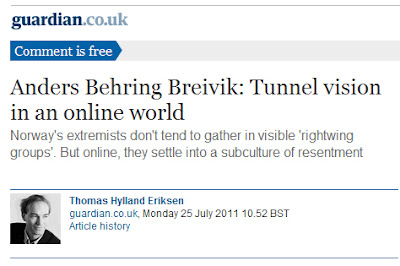 Norway's extremists don't tend to gather in visible "rightwing groups". But online, they settle into a subculture of resentment, writes Thomas Hylland Eriksen for The Guardian.

He tells us that "anyone familiar with the darker waters of the blogosphere would for years have been aware of the existence of a vibrant cyberscene characterised by unmitigated hatred of the new Europe, aggressive denunciations of the 'corrupted, multiculturalist power elites' and pejorative generalisations about immigrants, targeting Muslims in particular". Thus ...


Breivik must willingly have allowed himself to be brainwashed by Islamophobic and extreme rightwing websites. However, had he instead been forced to receive his information through a broadsheet newspaper, where not all the stories dealt with Europe's loss of confidence and the rise of militant Islam, it is conceivable that his world would have looked slightly different.

Perhaps one lesson from this weekend of shock and disbelief may be that cultural pluralism is not necessarily a threat to national cohesion, but that the tunnel vision resulting from selective perusal of the internet is.

This is seriously scary stuff ... a world where the MSM retains its monopoly as information providers, where "citizen journalists" are corralled and then banned where they do not follow the approved path. This is the voice of a new totalitarianism. And it's coming your way.