All the motivation you will ever need 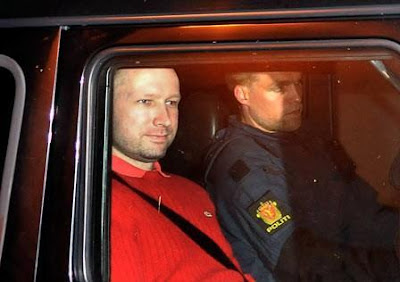 The groupescules are launching into advanced bloggernoia directed at the "right wing" bloggers, all but blaming them for inciting Anders Breivik to murder. Not least. the Washington Post, but others as well, are having a rip-snorting time spreading the blame, and offering pompous homilies.

So far, though, trawling through Breivik's "manifesto", the wuzzies are citing prominent "Islamophobic" bloggers, supposed experts on Islamic terrorism and think-tanks claiming to be on the frontlines of battling Islam’s attacks on democracies.

They are also pointing to organisations cited by Breivik, which include: the Foundation For Defense Of Democracies (FDD) and the Middle East Media Research Institute (MEMRI), as well as the Clarion documentary "Obsession: Radical Islam's War Against the West" and "right-wing" Pajamas Media.

And Melanie Phillips seems to have had a torrid time of it. Now she claims to have been smeared after having been picked on by the venomous Sunny Hundal on the basis of being cited twice by Breivik. However, such pundits seem to have missed a trick. Tucked into the text are several major references to Christopher Monckton, including links to two of his You-Tube videos, an honourable mention of Bishop Hill, and one to Steve McIntyre. As Autonomous Mind points out links are being made between climate change "deniers" and Breivik.

Booker railing at the EU's "culture of deceit" gets a good dissection, which is followed by a long quote from Gisela Stuart and an even longer one from Daniel Hannan.

Booker and North are then quoted at length on the EU, which Breivik seems to believe is responsible for creating multi-culturalism, and therefore must be destroyed. He has us concluding that, "The project Monnet had set on its way was a vast, ramshackle, self-deluding monster: partly suffocating in its own bureaucracy; partly a corrupt racket (...) The one thing above all the project could never be, because by definition it had never been intended to be, was in the remotest sense democratic".

They believe, says Breivik, this is why the EU is doomed and why it will leave a terrible devastation behind it, a wasteland from which it would take many years for the peoples of Europe to emerge. "I understand concerns that the destruction of the EU could cause instability in Europe", then says Breivik. "It will. But we will probably end up with some instability anyway, given the number of Muslims here that the EUrabians have helped in. Besides, if stability means a steady course towards Eurabia, I'll take some instability any day".

Some would hope that we could keep the "positive" aspects of the EU and not "throw out the baby with the bath water", concludes Breivik, adding: "I beg to differ. The EU is all bath water, no baby. There never was a baby, just a truckload of overpaid babysitters".

Despite all this, some are arguing that Breivik the monster "was a manifestation of the internet, the blogosphere, and its tendency to drive some individuals to ever more extreme views", putting the blame squarely on the likes of us scribblers, including – of course – Hannan, with five references in all.

Clearly though, one of the greater influences on this mass murderer has been that bastion of right wing sentiment, none other than the Guardian, which has eleven references (including links) – leaving poor Melanie standing. However, it is to the likes of Hannan that we must really turn. "Becoming and maintaining the position as a self sufficient Justiciar Knight sleeper cell involves the capability to motivate/indoctrinate yourself over a prolonged period of time, writes Breivik, further adding:


Self-financed and self-indoctrinated single individual attack cells, is the backbone of the Knights Templar Europe. The importance of the ability for single cell commanders to be able to keep their spirits and morale up through self-indoctrination and motivation by using specific motivational techniques has been stressed on multiple occasions.

"Taking long walks/work out while listening to select music is a very efficient way of sustaining your needs in this regard", counsels the man. "When you combine this ritual with reading the occasional resistance blog you gain all the motivation you will ever need. Repeat these routines on a weekly basis and you will sustain your motivation and moral for as long as is needed".

Not only were his ideas culled from the internet, but blogs sustained his motivation and morale. And those words, I fear, will be more than enough to convince the wuzzies that the "resistance blogs" should be shut down.