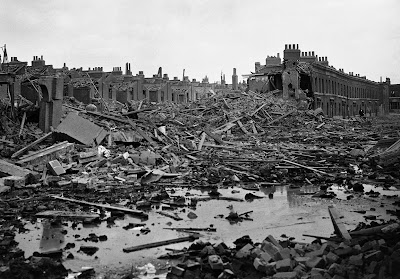 Nothing ever seems to be exactly as you think it is – or was – and that applies as much to the nostalgia industry as anything else. Thus, those who think it was so much better in days gone past might be intrigued to note this report (below right) taken from the Daily Mirror on 17 September 1940 – ten days into the London Blitz. 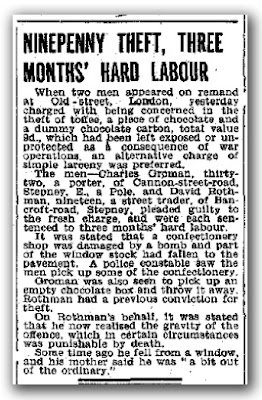 It tells the tale of two men, Charles Groman, thirty-two, a porter, of Cannon-street-road, Stepney, East, a Pole, and David Rothman, nineteen, a street trader, of Bancroft Road, Stepney – both living in the centre of the devastation brought by Hitler's bombers (pictured above - actually photographed on 17 September 1940).

The two men, imprisoned on remand, had appeared before magistrates at Old Street , London, charged with being concerned in the theft of toffee, a piece of chocolate and a dummy chocolate carton, total value 9d (less than 4p) "which had been left exposed or unprotected as a consequence of war operations" – i.e., looting.

The men, however, were relieved to learn that an alternative charge of simple larceny had been preferred, to which the men had pleaded guilty. Each was sentenced to three months' hard labour.

In evidence, it was stated that a confectionery shop had been damaged by a bomb and part of the window stock had fallen to the pavement. A police constable had seen the men pick up some of the confectionery. Groman had been seen to pick up an empty chocolate box and throw it away. Rothman had a previous conviction for theft.

On Rothman's behalf, it was stated that he now realised the gravity of the offence, which "in certain circumstances was punishable by death". Some time ago, the report continued, he fell from a window, and his mother said he was "a bit out of the ordinary".

The reference to the death sentence was in respect of the original charge of "looting" and it is therefore unsurprising that the men "preferred" the alternative charge of larceny, and the sentence of a mere three months' hard labour.

Looking at the "offences" though, one sees two men imprisoned for picking up a trivial amount of confectionery off the pavement, after an air raid. In modern times, most would struggle with the idea that this was even an offence, and the sentence seems barbaric.

But that was England in 1940 – the "good old days" of Churchill, warm beer – when you could get it – and the Blitz spirit. There is a lot wrong with things today – not least the low grade of leadership – but thankfully, we have progressed a little since then.

You might wonder, incidentally, how I happened upon this story – when research on the book is done and there is no need to be looking at such material any more. And herein lies the rub. My publisher, Continuum, has been taken over - by Bloomsbury, the highly successful publisher of the Harry Potter series. We are moving into the big time.

However, that means there has been a short delay in the publication schedule, and in the window afforded (which lasts for another four days), I have taken the opportunity to input some corrections and additional material. Not least, I have been able to acquire a rare and difficult to obtain microfilm archive of Sunday newspapers, which I expect through the post today.

Until Monday, therefore, I will be blogging, but will also be a little distracted, focused again on the madness of a bygone age – which actually affords some relief to the madness of today.