Is there no end 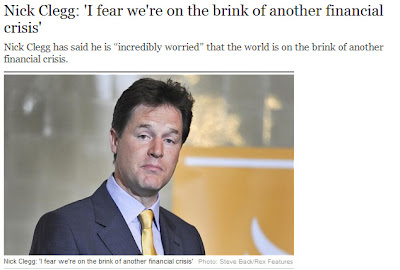 The admission is the first time that a senior British politician has suggested that the problems in Greece, Spain and Italy could affect Britain. Thank goodness we have him to warn us. We'd never have noticed otherwise.

But it does seem as if the turd-eaters are waking up. Yet, with the classic arrogance of the MSM, just because they have noticed, it becomes "news" and they start scribbling that all we lesser mortals should sit up and take notice.

Then we get Wolfgang Münchau in the Financial Times writing: "The biggest single danger in the eurozone crisis now is that events are moving too fast for Europe's complacent political leadership. Last week, the crisis reached Italy. And the European Union looked the other way".

Thus do we get some belated recognition that the obsession with "self" is doing real harm. While the Scumset have been out to play, the world is going to hell in a handcart.