All the news not fit to print 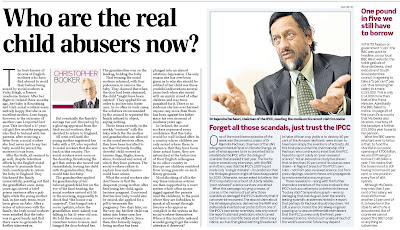 Superficially, there is an element of sameness about the column this week, as Booker yet again addresses the vexed issue of "stolen children". This story, though, is possibly more ghastly than some he has written, all the more for the subjects being anonymous.

I forget now how many months Booker has been beating this drum, and no one could now deny that there is a case to answer by social services, the police, the court system and the legal profession – to say nothing of the politicians.

Most of all though, there is an issue here about the media. This is the industry which professes to be concerned with people's rights and in freedoms yet not a single newspaper has followed up on Booker's work and developed a campaign – which is what is desperately needed.

It is thus left to Booker to plod on, in his own little ghetto, becoming the last repository for desperate parents, who are increasingly directed to him as the only journalist prepared to listen to their stories.

Equally, Booker is the only journalist prepared to take on Rajendra Pachauri, although in less detail than one would like, as so much of his space is taken by the "stolen children" saga. And as long as he is the only one writing the stories, that is how it is going to have to be.

He also finds a small space to take a swipe at Amanda Deeks, the fully paid-up member of the parasite class, once again a lone voice, also pointing out that we are still having to borrow £140 billion a year. This means that the Government is borrowing 20 percent, or one pound in every five, of all it spends.

That the newspapers cannot get to grips with such issues is perhaps why they are now part of a failing industry, with Autonomous Mind pointing out that they are fishing an increasingly shallow pool as readers turn away from them.

The only paper actually to increase circulation is the Mail on Sunday, the small rise of one percent attributable to its "Weekend Reward Club" scheme launched last month. This works by offering shopping vouchers and other incentives to those who buy the paper. That says a great deal about the content.

Worst hit of the Sundays is The Observer, which has lost 11.6 percent of its circulation, year-on-year, but the "heavies" such as The Sunday Times and The Sunday Telegraph aren't doing so well either, losing 7.8 and 6.7 percent of their circulation, respectively.

This is not the whole picture though, as all the papers have strong internet presences. But even here they are under competition from the likes of Huff-puff, which offers exactly the same lightweight tat for a fraction of the production cost – unsurprising as most of the news content is "harvested" from MSM sites.

The demise of the News of the World is going to distort the Sunday circulation figures for a while, but there is no disguising the fact that the industry is haemorrhaging readers. Perhaps if they started offering real news, and pursuing subjects of real importance, instead of leaving them to the Booker ghetto, they might fare better.

And there's a thought – a newspaper that actually offers serious news. Whatever next?