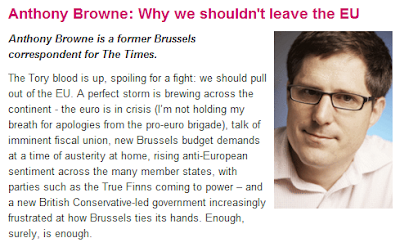 Mr Henry Smith will be so happy at the publicity he is getting. Interestingly, the Guardian content partner has still got him down as a "rebel", even though they now know this is wrong. What else isn't CH telling its readers?

Interestingly, one of the things this site is telling its readers, via Anthony Browne, former Brussels correspondent for The Times, is "why we shouldn't leave the EU".

Says the happy little chappie: "I voted for this government because I wanted to reform healthcare, education and welfare, so we get the public services we deserve, to bring down taxes and to stop the inexorable growth of red tape and bureaucracy. I didn't vote for it because I wanted to pull out of the EU".

It seems to have escaped the hollow brain of this creature, however, that no one actually voted for this government. It is a coalition, formed after the election, which means it is a stitch-up that occurred after the event.

More particularly though, no one ever gets to vote for our supreme government in Brussels, and nor would it make any difference if it did, as it lacks the legitimacy of a demos - which is why most people want the UK to leave the EU in the first place.

Strangely though, after all those years in Brussels, Browne doesn't seem to have cottoned on to that, which is perhaps why he is writing for a Guardian content partner – when the said Europhile can tear himself away from working for Boris Johnson as an "economic advisor" and calling for more jobs for the boys in Brussels.

Once upon a time when you lifted a stone, all sorts of multi-legged creatures crawled out. Now, with biodiversity under threat, all you get is Tories ... euroslime working for Boris as his economics advisor ... who'd have thunk it. Must be global warming.

But then, wasn't Boris once a Brussels correspondent for the Failygraph, about the same time his drinking partner Browne was also working over there for his? And now Boris is mayor of London and the otherwise unemployed Browne pops up as his advisor, on a very comfortable salary of £127,784 – plus expenses.

No wonder he's so interested in jobs for the boys. And yes, you are quite right. CH doesn't tell us that either ... the innocent Mr Browne is merely a former correspondent. It just wouldn't do to have him as Boris's highly-paid advisor in this context ... that would spoil the mayor's carefully nurtured but utterly false image as a eurosceptic.