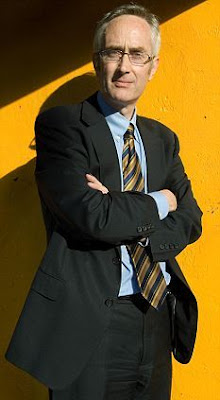 On the one hand, we have a report detailing how "incompetent" taxman are bullying the innocent, making entirely unwarranted threats which, MPs say, could undermine the whole taxation system.

On the other, we get this, a report that Sir Michael Barber, a former aide to Tony Blair, has been paid an "obscene" £5,505 a day to advise the Government on doling out its vast foreign aid budget – with the added news that DFID has negotiated a discount. He is now working for a bargain £4,404 a day.

This was for a contract via the consultancy McKinsey, which was actually planning to charge £7,340 a day for Barber's "advice" on improving Pakistan's education system over 45 days, making a total of £330,300.

Whatever the media and the political claque try to sell you as their agenda, this is the core issue, which affects everyone in this land. We have a dysfunctional tax system, which is resorting to an increasing level of bullying and sundry unpleasantness to extract ever-increasing amounts from an ever-more impoverished and unwilling population, matched only by serial incompetence and profligacy when it comes to spending our hard-earned cash.

At this point, one might offer the traditional incantation: "and the reason we should not rise up and slaughter them is ...?" But, interestingly, not a few people have sent me this link, retailing how "Radical Muslim" Bilal Zaheer Ahmad – described by a Bristol Crown Court judge as "a viper in our midst" has been jailed for twelve years for calling for jihad against MPs.

The difference, one supposes, is that we are not actually advocating the slaughter of our MPs (yet). We simply ask why – in an entirely rhetorical fashion – they should not be. Arguably, though, our Madame Defarge list (which I promise you, we will continue) is such a call, except that it is not. Simply, come the revolution, these people should be put on trial. The outcome, at this point, is not our concern.

On the other side of the coin, it must be noted that those who fail to feed the monster with its demands are already put on trial. If they fail to deliver, they are stripped of their possessions and, if they try to resist, force is used against them. For certain demands – notably Council Tax – prison beckons.

This is something that should never be forgotten and cannot be repeated often enough. The likes of Mr Barber – and the rest of the parasite class - are kept in the luxury they most certainly do not deserve by extracting sums of money from those who have considerably less than them, the system underpinned by force which will stop at nothing.

At the top of the manure heap, representing us and permitting this to happen, are our MPs. Under our system, they and only they can stop it. That they do not makes them responsible for it. We should, therefore, have no hesitation in reminding them of this, and the day that becomes a criminal offence is the day the revolution starts.