Booker: a question of history 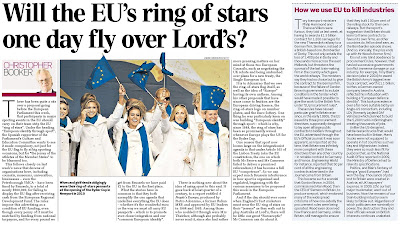 The chilling sight of golfing WAGs happily waving the ring of servitude introduces the Booker column this week (click to enlarge). He picks up on the proposal in the EU parliament that participants in major sporting events in the EU should carry on their team strip the EU "ring of stars".

Booker also notes last week's news that dozens of organisations here, including councils, museums, universities, businesses – even the Peterborough YMCA – have been fined by Brussels, to a total of nearly £500,000, for failing to display the EU flag after receiving cash from the European Regional Development Fund.

The rules impose this advertising as a condition of EU funding, even though every penny of it must be matched by funding from national taxpayers, and for every pound we get from Brussels we have paid £2 to the EU in the first place.

What the stories have in common, Booker tells us, is that they both exemplify the one agenda that underlies everything the EU does – whether it's the wonderful euro or the way we must all carry EU passports – which is to promote ever-closer integration and our "common European identity".

That "identity", of course, does not extend to getting us jobs, with the next story featuring the £1.5 billion contract for 1,200 carriages for the new Thameslink railway to a German firm, Siemens, instead of a British-based one, Bombardier of Derby.

Here, Booker notes that the EU procurement rules at the heart of this issue have caused particular grief in Britain ever since, in the early 1990s, the EU issued its three procurement directives.

When Engineering World reported that 50 percent of all the engineering contracts advertised in the Official Journal came from Britain, this became such a scandal that Gordon Brown, in 2004, commissioned Alan Wood, then the CEO of Siemens in Britain, to produce a report on the issue.

Wood endorsed many of the widespread criticisms of how one-sidedly the procurement rules were being operated. He even observed how France and Germany, unlike Britain, still managed to ensure that they built 100 percent of the rolling stock for their own railways. But the report's suggestion that Britain should learn to frame contracts to favour its own firms, as other countries do, fell on deaf ears, as the Bombardier episode shows. (And so, ironically, the prize ends up with Mr Wood's former firm.)

It is not only blind obedience to procurement rules, however, that has led successive governments to inflict immense damage on our industry. For example, Tony Blair's decision (also in 2004) to award the British Army's biggest ever truck contract, worth £1.1 billion, to MAN, a German-owned company based in Austria.

This reflected Blair's infatuation with building a "European defence identity", which took precedence over a far more suitable bid by an Anglo-US consortium, including LDV (formerly Leyland DAF Vehicles) which planned to build the 5,200 trucks in Birmingham, creating thousands of jobs.

Had the media not been so obsessed with "self" and the NOTW affair, it might have made use of the "freedom" it claims as so important to investigate these issues. But, at the time, Booker was the only national MSM journalist to cover the MAN scandal – and only a few are covering the Bombardier story.

One of the latest reports (apart from Booker) is in the Mirror. This has a comment from methods engineer Mick Smith, 49, with 33 years' service at the Bombardier plant. Smith is angry. "It's disgraceful", he exclaims. "The lads feel they have been stabbed in the back", he adds, with the immortal line: "But what do you expect from the Conservatives?"

Transport Secretary Phil Hammond blames Labour – as the Tories tend to do, matching Labour, which always blamed the Tories - claiming European rules negotiated in the Blair-Brown era require him to give the Thameslink contract to the lowest bidder. If this sounds like a cop-out for one of the Cabinet's most Eurosceptic ministers, says the Mirror, that's because it is.

And it fools no one in the plant. John Pearson of Unite, chairman of the works committee, insists: "This wouldn't have happened in any other European country. The Germans stick by their own, and the French and Spanish do the same".

This brings us to the last of Booker's pieces, chopped out of the print edition and online only. This is the irresistible story of the Phoenix dust storm and the propensity of the warmists to blame any "extreme weather event" on climate change – even though, in this case, there are records going way back of similar events.

One of the more touching features of our global warming zealots, Booker writes, is their remarkable ignorance of history. As their religion crumbles, they clutch ever more desperately at any "extreme weather event" to support their sad creed.

Hot or cold, dry or wet, droughts, heatwaves, floods or record falls of snow are all inevitably cited as evidence of mankind's "disruption of the climate" – even if cussed old Mother Nature has produced such things hundreds of times before. History, it seems, has a lot to answer for. But ignorance of history has even more.