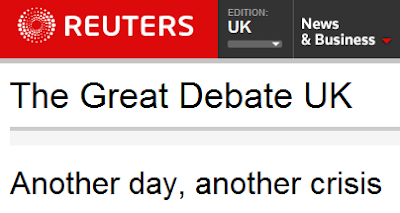 When the unusual becomes normal and crisis becomes a way of life, you know that we are really in trouble. You certainly get that impression from the Irish Times, but – of course – not from the British media, caught up as it is in its Murdoch obsession. I may be wrong – but my considered judgement is that the Fourth Estate has completely lost it.

In what may be a flash of insight, or merely an intellectual cul-de-sac, it suddenly occurs that we are dealing with the tale of two crises. One is real, the other imagined. Illustrating the latter, we have such as Steve Richards in the not-so-Independent, expending his life energy, speculating on a preposterous theme, quite oblivious to the reality of the tumultuous crisis building up around him, which he thus completely ignores.

One struggles here for analogies, but the vision comes to mind of frightened little men who, caught up in a real war on their doorstep, retreat inside their bunkers and huddle round their TV to watch and discuss re-runs of Downfall. Perhaps that is not an adequate enough description, but the difficulty is in conveying with sufficient force and clarity, the complete retreat from reality of our political and media classes.

But today is a special day. It is Bastille Day. The guillotine beckons and we'll return to our list of MPs later. That is our reality - having to confront these foul, posturing creatures. Whatever Murdoch might have done, he did it with his own money. They have done worse. They stole ours.