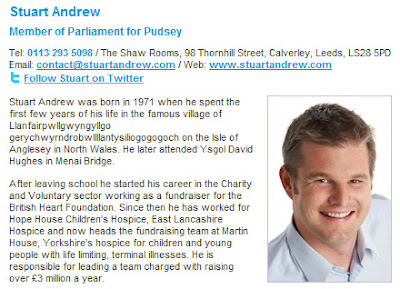 Mr Andrew has an interesting history. Openly homosexual, he campaigns openly for homosexual issues and, noting that the party had set up an LGBTory Group, thought that "perhaps it was time to set up a European version to help form new opinions across the EU".

He stood as a Conservative candidate in the 1997 Parliamentary election in Wrexham. Subsequent to this, he left the Conservatives citing issues with the "direction of the party". Those "issues" may or may not have been connected with the fact that, during the campaign he was beaten unconscious in what was described as a politically-motivated street attack. He was hospitalised along with his father, who had come to his aid.

He then joined the Labour Party, for reasons claimed to be over the Conservative Party's attitude to homosexuals.

However, there are different versions of this tale. After winning a council seat in Wrexham in 1995, the only Conservative gain in the whole of Wales and the parliamentary candidate in 1997, he tried to become Welsh Assembly candidate for a winnable seat but was was voted 5th in the PR list, realised he would not be elected and decided to defect to Labour in the middle of the campaign.

Only after he was narrowly defeated in the 1999 election did he move to Leeds and rejoin the Conservative Party. He then got a ticket on Leeds City Council from 2003–2010, initially representing the Aireborough ward, and following boundary changes representing the Guiseley and Rawdon ward – during which time the Conservative-coalition authority provoked a marathon strike by binmen by threatening to cut wages by 30 percent.

For the last period as a councillor, before getting elected as an MP on 6 May 2010, he managed to rack up £19,477 in expenses. He was also heading the fundraising team at Martin House, Yorkshire's hospice for children and young people where he was responsible for leading a team charged with raising over £3 million a year.

When he was elected to the richer pickings of Westminster, he resigned as a councillor, with the by-election for his vacated council seat being held on Thursday 14 October 2010. That same month, Mr Andrew joined the Welsh Affairs Select Committee. He now lives in Rawdon and says he enjoys walking his dogs on Rawdon Billing, socialising with friends and attending the gym.

This is the sort of man who is clearly comfortable with Mr Cameron's modern "Conservative" party, and equally at home with the idea of giving away large amounts of our money. His portion of the giveaway is £36 million, which he now owes us. He can, therefore, now consider himself Noted By Madame Defarge (NBMD). The knitting gets longer and longer.