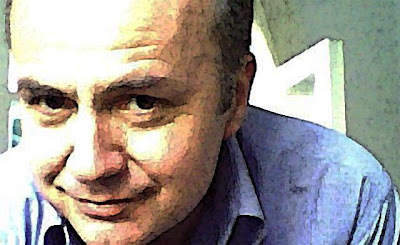 "Europe's bold project is not a peep show, but a sinking ship … let's get an Italian clown to play with the deckchairs", is the title of the piece in which he recalls interviewing Romano Prodi EU commission president from 1999 2004:


He flapped his arms in some sort of funky-chicken spasm; he huffed, puffed and jittered on camera like a demented Muppet, but [he] was a joy to interview as he always understood the first rule about broadcast media: that it was entertainment driven ...

His comment during a TV interview for an American network in 2003 still brings a smile to my face, returning to me as I often stroke the shaft of nostalgia in the Belgian capital. "My job is to re-connect Europe's citizens with the European Union", he said, with the eager look of an Albanian paedophile waiting for the school bell to ring.

"Ah but Il Presidente", I stirred in the plastic studio seat which seemed to go well with my even-cheaper suit. "Surely you don't mean: 're-connect' … but simply 'connect'"?

After an analysis which is only too familiar to readers of this blog, he notes of recent events that: "This is the beginning of the end, as soon the giants – France and Germany – will be forced to infringe more EU laws just to satisfy local unrest. Then the project will start to look about as stable as a spastic trying to repair a broken TV with a bowl of jelly".

Jay has done a remarkable thing here, writing in a fresh and entertaining fashion on a theme – the collapse of the EU - that is so desperately familiar that most of us are bored witless even thinking about it.

For sure, it is going to happen. The thinking, as I have said so often before, is what should happen next ... what we should be doing. Even leaving the EU would not solve anything, and the break-up of the EU will create as many new problems as it solves.

Most of all, we need to do something about the chronic democratic deficit in this country, reining back our politicians and bringing them under control. That will need more than entertaining writing, but even that would be a good start.