No need to argue 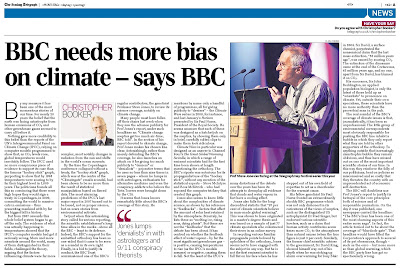 In his column this week, Booker does a fairly comprehensive demolition job on the BBC Trust review of the impartiality and accuracy of the BBC's coverage of science. Writing the column was not easy, but it was not the labour of months. The basic theme was easy to establish, and relatively little work was needed to put the arguments together.

And that makes for an intriguing puzzle – another one. Why are the arguments adduced by the BBC are so shallow and implausible that they can so readily be demolished? You would have thought that, if the BBC wanted seriously to make its case, it would have done a far better job than it has done.

But then, the probability is that the BBC does not see the need to substantiate its case. Endowed with that mystical quality known as "prestige", massively supported by its hypothecated tax which relieves it of the burden of responding to customers who might otherwise exercise free choice, and endorsed by the Scumset classes, it need only to make an ex cathedra statement.

Since, in its own terms, it controls the debate in the media of which it has charge, it has no fear of challengers, as their arguments can be drowned out. And even though the naysayers might be right, what does that matter to the BBC? They cannot hurt it, or even begin to dent its supreme arrogance and indifference to the truth.

What we have, therefore, is the ultimate examples of two phenomena – the effect of absolute power, albeit in a narrow context, and the exercise of power without responsibility. When you have power, you do not need to argue.

And that of course points to only one long-term solution. The BBC must be broken up. But that is not going to happen in a hurry. In the interim, the Bookers of this world will challenge the monster, but they cannot prevail.

The real answer is power – you need power to beat power. And no one gives you power. You take it. The BBC will die when we wish it to die, and there are enough of us, determined enough to make it happen. And I could not even begin to estimate when that might be.