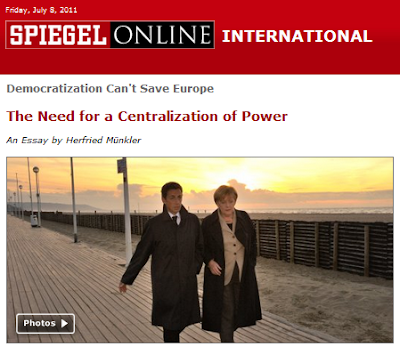 While the politico-media establishment in the UK continues to wallow in its own ordure, Spiegel online gives space to German political scientist Herfried Münkler to argue for greater centralisation in the European Union. Democratisation, he says, cannot save "Europe".

Compared with the shifty equivocation of Cameron and his Tory claque, who only have to open their mouths for lies to issue forth, Münkler is at least refreshingly honest. He eschews the idea of giving more power to the people. This, in his book, is not the answer to the myriad problems currently facing the European Union. Rather, the EU's elites need to improve - and power has to be taken away from the periphery.

In theory, this man is right. Empires also start decaying at the edges, but they only do so when the centre is weak. Münkler argues that it is the elites at the centre which are holding the European Union together, and for the EU to survive, the centre must be strengthened. Pushing for the democratisation of Europe can quickly lead to European disintegration, as the conditions for democracy in the EU do not exist. Not least, he says, the European population has never been and still is not a European people.

He then goes on to say that the main problem of a constituted Europe is that power triggers centrifugal forces the minute the glow of economic prosperity begins to fade. A political and economic player that requires growth and cannot handle disturbances is not fit to survive in the 21st century. Such an actor is a problem and not the solution.

Thus, he says, the current crisis must be viewed as an appeal to transform Europe in such a way that it will produce better elites and give these elites more latitude to take action. This amounts to an amendment of the Lisbon Treaty, and it encompasses the painful thought that a smaller but more effective Europe is better than a larger Europe whose citizens view it with sullen indifference at best.

His observations on the effect of "democratisation" is equally candid. The elites in Brussels and Strasbourg will still be in charge and the only option available to the European people, "to the extent that they can be referred to as such", would be to react to obvious failure by voting their leaders out of office - and to vote an opposing elite to take their place.

Reflecting exactly the dilemma that affects us here in the UK, he notes that it is open to question as to whether this would fundamentally change anything. As the example of Belgium shows, "democracy does not automatically lead to the installation of capable elites".

Since last summer's elections, Belgium's political parties have been unable to form a functioning new government. Belgium's democracy suffers from ethnic quotas and political parcelling. It has long been incapable of reaching the most basic decisions. And, now, not even compromises are feasible.

It is to be feared that a more extensive democratisation of "Europe" would lead to a very similar situation because Europe is at least as diverse as Belgium on national and economic issues.

As to how we develop the "more capable elites" that Münkler thinks are so necessary, he is remarkably opaque. What he tells us is that the general framework of elite behaviour - the European constitution, so to speak – must be "substantially restructured".

This is very much in the territory of "the solution is simple – something must be done". But if we probe deeper into the Münkler text, all we get is the stark but repeated observation that "the periphery has too much power and the centre too little". The key step, therefore, is a political reconstitution of Europe.

Somehow, despite coming from a political scientist, this does not immediately strike one as a winning hand. Coming from a German, it sounds more like he has been dusting off his copy of Mein Kampf - it is a complete non-starter. But that still doesn't make the man wrong. What it does say is that, since the very thing he says must happen cannot happen, the EU is doomed to failure. It is only a matter of time.