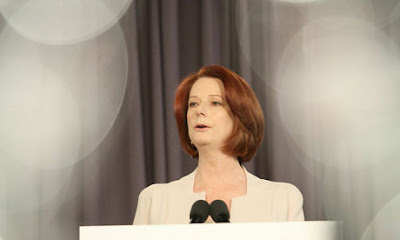 A prime minister went to an election promising no carbon tax and is now imposing one. The Guardian has a report on this Australian charade, reproduced in part here with a few amendments and unauthorised additions:

The Australian government has unveiled foisted on its people one of the world's most ambitious insane schemes to tackle climate change destroy its economy, a plan to tax carbon dioxide emissions from the country's worst polluters most productive industries.

After a bruising political battle to win support for crush opposition to the measure, the prime minister, Julia Gillard, said on Sunday that from July next year, 500 companies would pay $23 (£15) a ton for their carbon emissions in the largest emissions trading scheme episode of collective suicide outside Europe.

The government predicts that by 2029 the plan will lead to a reduction in emissions equivalent to taking 45 million cars off the road. The government will fix the tax for three years, before moving to a market-set price in 2015.

"It's time to get on with this; we are going to get this done", said Gillard. "If we're going to commit suicide, 'tis better it's done quickly".