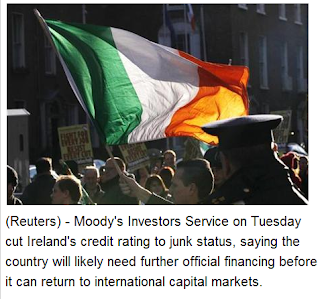 If the "colleagues" don't think that this is bad enough (left), they now have the indignity of being lectured by that insufferable prat Osborne.

"The time has come", the golden boy says, "for decisive action to address the crisis in the euro zone and prevent market uncertainty doing real damage to the world economy". This he said a statement after a meeting of Europe's finance ministers in Brussels.

It is just as well that it was a statement. If he'd said it to their face, they'd probably have killed him. Did he really think that they had to be told that "decisive action" was needed?

Anyhow, according to this idiot savant, the eurozone countries should now:


... set out in detail how they plan to expand the scale of the financial tools at their disposal, carry out credible stress tests backed up with recapitalisation for the most vulnerable banks, involve the private sector to make Greece's debt burden more sustainable, earn fiscal credibility through concrete action to reduce excessive deficits, and push forward structural reforms to boost growth.

This man should try listening to himself. One of these days he is going to utter this bilge to the wrong audience, whence he will be lucky if he gets to live to the end of the sentence.

Perhaps he should take a leaf out of Nick Clegg's book, and save us the trouble of doing it for him. Put Huhne on the list and this is one endeavour where we can fully support our politicians.