The threat of the individual? 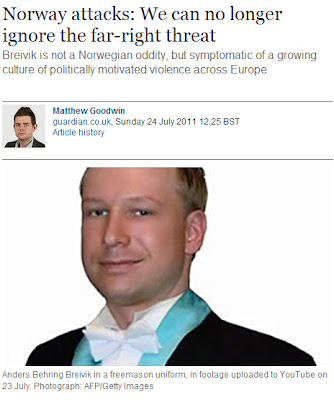 With the bodies still warm, The Guardian is hot on the trail of "far right" followers, using Nottingham University lecturer Matthew Goodwin as its foil.

He argues that the "tragedy in Norway" this weekend may prove to be a watershed moment in terms of how we approach "far right" followers, groups and their ideology.

Until now, he says, European democracies and their security services had focused almost exclusively on the threat from al-Qaida -inspired terrorism. Right wing extremist groups and their more violent affiliates, he says, were dismissed as a disorganised, fragmented and irrelevant movement.

One does not need to read much more to see the direction of travel. The demons of the left now have a face and a name – and (at last count) 93 martyrs to inspire what looks suspiciously like a pogrom in the making.

What seems to have spooked the Left most, however, is that Breivik acted on his own, without fellow conspirators or even outside assistance. He is what Goodwin calls one of the right wing "lone wolves".

Of course, to the "collective", the idea anyone actually acting individually is almost incomprehensible. And when they tot up in their fevered imaginations the number of putative "right wingers" (meaning those with ideas different from their own), this becomes the stuff of nightmares.

As opposed to the crowd, individuals now become the threat. No longer is there that feeling of safety that comes from being part of a perceived majority. If one man can do all this, as an individual, think what thousands of individuals can do.

Yet, even as Goodwin sprays around his "right wing" epithets, he concedes that Breivik was "far from what we might term a traditional rightwing extremist". While he was profoundly concerned about the effects of immigration, multiculturalism, Islam and the growth of settled Muslim communities, he was also dismissive of crude racial supremacist and neo-Nazi ideas and parties that espoused these ideas.

With that, the imagination soars. Even people who are not actually "right wingers" could still be right-wingers. The world is full of them, all of them heavily disguised as individuals.

Even then, Goodwin cannot quite handle the concept. Despite acknowledging the "lone wolf" threat, he reverts to the standard demonology of the collective, and the threat that the next wave of terrorism in Europe will come not from al-Quaida-inspired groups, but rather right wing groups that want to respond to this threat and reassert the position of their wider group.

It is far too early to tell whether Breivik's actions will inspire copycat attacks, says Goodwin. But one thing remains clear: the threat from right wing extremist groups and ideas deserves far greater attention.

Someone should perhaps point out the inconsistencies here. Either it is groups, or is it "lone wolf" individuals? The latter is a lot more scary to the likes of Goodwin, as there are a whole lot more of them than groups.

But, if individuals are to be identified as the threat, there will be no stopping the collective. Just to be different will be enough to invite suspicions and countermeasures. We could indeed be looking at a watershed ... and it ain't pretty.