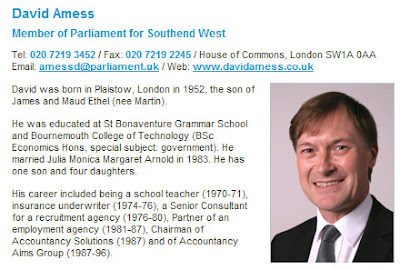 The next in our Hall of Shame is David Amess, a Conservative (In Name Only) supposedly representing the constituency of Southend West. He has a fairly substantial majority of 7,270 and is most closely challenged by the Limp-Dims.

Mr Amess's facebook profile is here. He seems to be one of those MPs who have risen without trace to less than giddy heights, and has remained ever since on a plateau of obscurity. Nevertheless, his friends attest to his keen sense of humour and his willingness to partake in jolly japes, although he is considered a little gullible by some.

Then, of course, he would have to appreciate a joke as he was Parliamentary under secretary to Edwina Currie in 1987-88, but that apart there is no obvious reason why Amess should have been so keen give the IMF another £9.8 billion.

Well, whatever his motivation, little Mr Amess's personal share of the smash and grab he sanctioned is £36 million, which he now owes us. He can, therefore, now consider himself Noted By Madame Defarge (NBMD). The knitting grows longer.