Making him rather more famous that he had bargained for, Booker has targeted the egregious Henry Smith MP in his column this week, recording him as the man who voted "both for and against giving away your £9 billion".

Readers of this blog will be familiar with the saga but, after Smith's contact with us, we checked with the very helpful House of Common information services, asking them whether an MP was allowed to vote twice in the same division. Initially, we were referred to the House of Commons Information Office Factsheet, which told us this:


There is no means in the House whereby a Member may register an abstention. But Members may continue to occupy their seats during a division to signify abstention. A Member who has voted by error may, if he or she has time, cross over to the other lobby and vote again, hence nullifying the effect of his or her original vote, though of course this procedure does not allow him actually to register a vote in favour of the proposition on which he made the first mistake. Members can also, if they wish, stay in the lobby and not register a vote at all.

However, in a follow-up response, we were then referred to the "bible" on parliamentary procedure, Erskine May, which had this to say on the matter:


Intentionally voting in both lobbies is an accepted way of cancelling out the effect of inadvertently voting in the wrong lobby. However, Members who have voted in both lobbies in the same division have been allowed on the following day to state as a matter of personal explanation in which lobby they intended to vote, and the numbers of the division have been directed to be corrected accordingly. A correction has been directed to be made at the end of government business on the same day after an explanation by a member of the government on his own and a colleague's behalf. The Speaker has deprecated as 'unparliamentary' the practice of voting on both lobbies as a demonstration of a 'third' position.

Thus, Members have, on occasion, voted in both lobbies in an attempt to register an informal abstention and there is no Commons rule that prevents this. But it is "unparliamentary".

What now gets extremely interesting is that, via an MP & Councillors' e-Surgery, the egregious Mr Smith now seems to be distancing himself from his own comments, apparently denying that he attempted to claim that he had voted against giving away over £9 billion of our money.

That is certainly how I read this comment so, for the avoidance of doubt, I reproduce below screen grabs of the sequence of e-mails received from Mr Smith, and those sent to him. 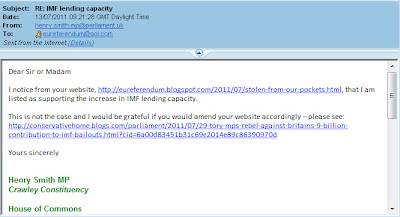 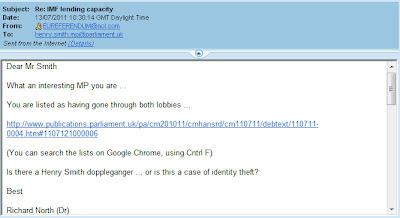 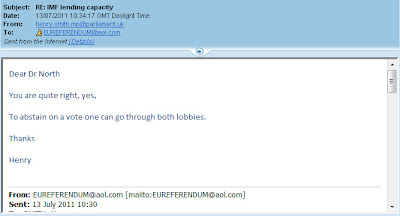 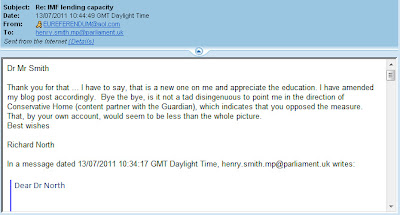 Only when questioned does Smith then admit that he was in fact "abstaining". When challenged as being misleading, Smith does not answer, but then appears to deny in his forum that he has made the comments. In so doing, this MP is turning out to be the usual sorry example of a politician, adding weight to Booker's comment in his column, that: "No doubt this man will go far".

The more he tries to obscure his original intervention, however, the more it is being picked up by other blogs, and subjected to further comment. Perhaps Smith should quit while he is behind.