The symptoms, not the cause 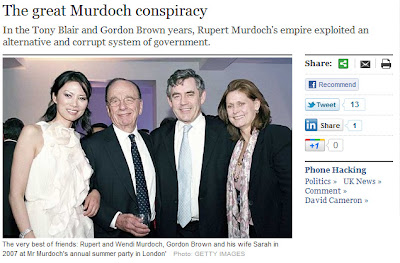 As the Murdoch saga gets even more tedious, one gets just a slight sense that even the BBC hand wavers and some MPs are dimly beginning to appreciate that they have gone far beyond the tolerance level of ordinary people, who have long since lost interest in the ins and outs of this soap opera.

What is of some interest to a serious student of politics, however, is how it confirms the circular, introspective relationship between Westminster politicians and the London media, the collective grouping forming the substantive part of our provincial (i.e., British) political classes.

Another point of interest is how little the denizens of what we outsiders term "the bubble" understand of the reasons for their current predicament. They know nothing of the forces which are driving their narrow obsessions, and have retreated into their own tiny, self-referential world. This has little more relevance to the grander sweep of history than a TV soap opera, which it so closely resembles.

That much is illustrated by a 1500-word essay by the King of the Bubbles, Peter Oborne, who seeks to explain the genesis of what he calls the "great Murdoch conspiracy", and thereby fails completely to get to the bottom of the phenomena which are afflicting him and his kind.

To cut a very long story short, with real power increasingly transferred to the EU and their subsidiary quangos and agencies (as well as anonymous organisations such as the Basel Committee on Banking Supervision), politicians have less and less power, and less things to do with their time. As a result, they internalise, and focus more on politicking than performance - affording huge emphasis to "self" and attendant trivia, corrupting everyone and everything they touch, as Raedwald so rightly observes. 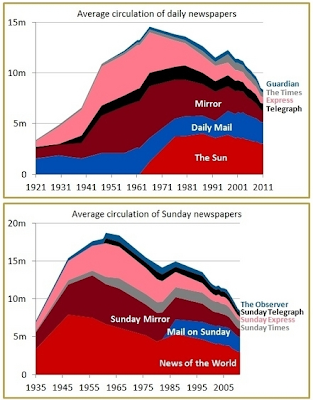 On the other side of the coin is the media, which in part gains its power from its symbiotic relationship with politicians. As power is progressively offshored to the EU and other institutions, the media lose their influence, and with it their real power to shape events. With that, as the Spectator helpfully shows, their circulation declines.

More crucially, what also happens is that the role of the media changes. As politics becomes shorn of power, and therefore meaning, election success depends on presentation rather than substance. The elections become marketing exercises, in which media are crucial. Enter the Murdoch dynasty, and the current imbroglio.

No longer a power in its own right, the media too has internalised - and the Murdoch empire more successfully than most. It has dropped into "soap opera" mode, clinging to the politicians and reporting more and more on "court gossip", exerting what residual power it has by becoming the "king maker".

By this means, Murdoch has become "powerful". But it is a fragile power, exerted only on and within the bubble, because neither the media nor the provincial politicians are powerful in any real sense. They have power only over each other, their proceedings not dissimilar to the bickering and machinations of the Bourbon court in its final stages of decay.

The test of this, of course, is in EU politics. There, in the grey couloirs of Brussels, there is real power, and an almost complete absence of the personality politics that now dominates provincial British politics. Grey, anonymous men and women, who exercise real power, have no time nor need for court gossip. And they have no truck with the gossip peddlers such as the Murdoch empire has spawned. The writ of Rebekah Brooks does not run to Brussels.

Within the foetid bubble of provincial British politics, however, personalities and soap opera have filled the vacuum left by the departure of power. But that has created a closed loop effect which means that London politics, for the rest of the nation, has increasingly become a spectator sport.

Thus, we watch their proceedings on television, listen to their blatherings on the radio, and read about them, not for the information or intelligence offered, but rather in the manner of curious onlookers watching the feeding of animals at the zoo, simply for the spectacle of it. And that is where we are now.

One is almost tempted to throw peanuts at them, and would but for the mess caused. But, in power terms, that is all these performers are worth. They are a sideshow, mistaking the curiosity of the crowd for interest and engagement. Long have they ceased to understand that what they see are the symptoms of their own demise – not the cause of it. Decadence is a good name for it - and in time they will be swept away.