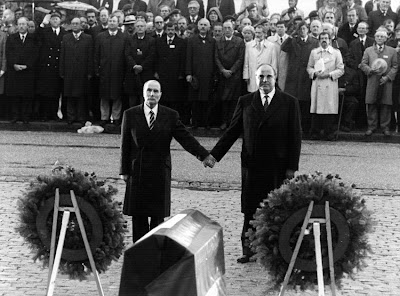 The date is 22 November 1984. The men holding hands are François Mitterrand and Helmut Kohl. The place is Verdun in front of the Douaumont ossuary, housing the skeletal remains of at least 130,000 unidentified combatants, killed in the murderous battle of 1916 – visible to the public through small windows set at ground-level around the building.

The site is quiet and, even at the height of summer, it feels cold. The birds never sing. That sounds like folklore, but they don't. There is an eerie stillness about the place, and one feels a great weight lifted when you get clear of it, down the hill and back into the town of Verdun itself. 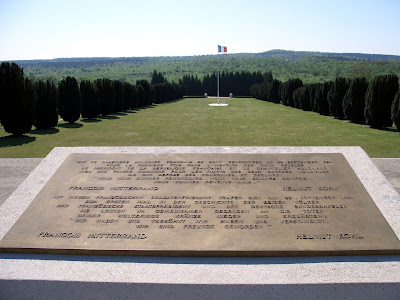 There is a plaque commemorating the meeting, on the very spot where the two men held hands. It was the first time the leaders of the two great nations had met on ground which had once been a nightmarish killing field. It wasn't really a "battle" - it was more slaughter on an industrial scale. And it, more than anything, tells you about the European Project. It explains the driving force – the Franco-German "motor" as it is called.

Now we have Merkel and Sarkozy – and Ambrose says the wheels are falling off. Yet it was felt that, with enlargement bringing the community to 27, the EU would transcend this core partnership – and come of age. That, really, was what the European Constitution was about. 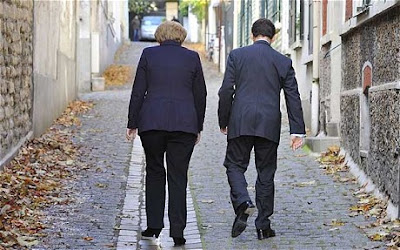 But in fact, the "motor"remained the driving force. If Ambrose is right – and I think he could well be – and it has stalled, then it is over. The final collapse may not come immediately, but without that very clear and close relationship between France and Germany, the EU is no more.

Verdun tells you that. The EU is nothing without its history. But it remains trapped in the history. Take it away and it is nothing. The question is, what do we do now? It becomes more and more urgent that we find an answer. We have wasted too much time already – and if we don't, others will. And we might not like their answer.