The lies they tell 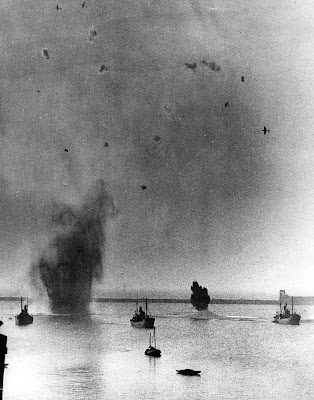 Seventy-one years ago today, in the Dover Straits the weather was fine with light, north-westerly winds and haze. Two sizeable convoys were on the move and an early morning raid by German aircraft was brewing, with the seamen expecting an attack at any moment.

Just after seven, however, it became apparent that the ships were not the target. The raid was heading for Dover harbour. Air Vice Marshal Park, from his bunker in Hillingdon, released a squadron of Spitfires and one of Hurricanes, which raced to the scene to intercept the Germans.

The fighters met what turned out to be twenty Stukas supported by about fifty Me 109s. As the waters of the harbour erupted under a storm of bombs, four Stukas were shot down. But the Me 109s had the advantage of height and extracted a toll of five British fighters, killing one pilot. The ferocious fighting was made all the more hazardous for the RAF by the enthusiastic participation of anti-aircraft gunners.

This was the first of two attacks, both witnessed by a Daily Express staff reporter who penned an account for his newspaper the following day, telling readers "I saw how bad the bombers' aim was," he says. "Ships in the harbour had bombs scattered around them, but they were not hit. Five trawlers had narrow escape".

He was by no means the only one to make such a claim and by 9 August 1940, the War Illustrated (above) was unequivocal in declaring the battle a British victory, publishing what became the iconic photograph of the period (top left). And it was a lie. The British media had gone way beyond basic censorship - which entails omitting militarily sensitive information. It had crossed the line into propaganda, deliberately lying about events.

Far from emerging unscathed, the harbour had taken considerable damage. By the end of the second, the steamer SS Grondland, which had been damaged on the 25th, had been sunk. Nineteen crewmen were killed. Patrol yacht Gulzar was sunk in the submarine basin. 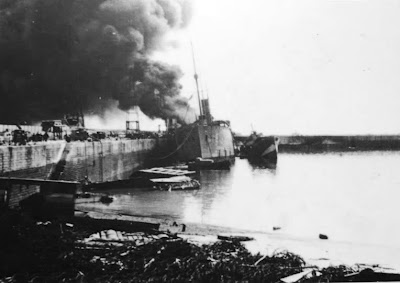 But, more significantly, the depot ship HMS Sandhurst - damaged two days previously - was set on fire (pictured above and below). With the half-submerged wreck of the destroyer HMS Codrington still alongside, had her substantial store of fuel and explosives detonated, it could have devastated the town. 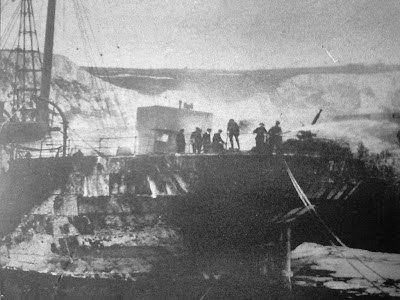 Faced with this desperate situation, the civilian fire brigade, instead of doing the wise thing and evacuating the area, decided to fight the fire. Again and again, personnel from Dover Fire Brigade and the Auxiliary Fire Service forced their way into the burning ship. Despite thick black smoke creating a pyre visible for miles, they stayed in place as the bombers returned. The fire was extinguished and the town saved.

One can only guess at what exactly transpired, for the story was never told publically by the media. But, for their bravery, three senior fire officers were awarded the George Medal: Ernest Harmer, Cyril Brown and Alexander Edmund Campbell (pictured below). 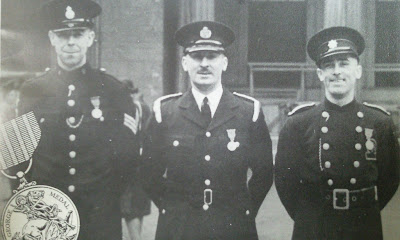 A fourth person to receive the medal was Harbour tug master, Captain F J Hopgood. Six more firemen, Hookings, Foord, Gore, Cunnington, Hudsmith and McDermott were mentioned in dispatches. In the Gazette details, however, the date of their heroic deeds was not specified. The details of the Dover raid were to remain secret until after the end of the war. 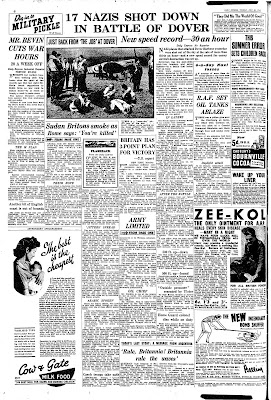 So who were papers (Express report right)  and the authorities trying to fool? Certainly, it cannot have been the Germans. The thick, black smoke pouring from the stricken Sandhurst, rising a thousand or more feet into the air, could be seen for miles. The Germans across the Channel could see the smoke and would have known that had scored the hit.

This, therefore, was not about fooling the enemy, but the British people. They were being sold a preferred narrative, in this case that the bravery and heroism of the gallant RAF pilots had defeated the Hun. The authorities needed to deliver a victory, and this was it.

For the narrative to stick, though, the heroism of the gallant band of firemen - the ones who really saved Dover on that day – had to be suppressed. And even to this day, the lie survives. Francis Mason, for instance, in his definitive book on the Battle of Britain, remarks that the attack on Dover "caused remarkably little damage". There is no mention of the heroic battle to save the Sandhurst.

For sure, at the time, the newspapers were under censorship restrictions, but that only constrained what they could print. There was no obligation to lie, and the government of the day could not have forced unwilling proprietors to do so. But the papers did lie, freely and willingly. And they were to lie consistently, through the war and they do so right up to the present.

The episode, though, is of special importance. It demonstrates how easily the record can be falsified and, once done, how this can survive into the history books as a true record of events. One should always be aware, therefore, that the narrative you read may not necessarily be true, even (or especially) if it appears to be so.