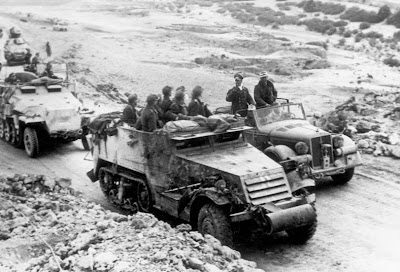 That is the sub-text of 13th-Century Fox's diatribe, whence he declares: "Far too many of our European partners are still trying to get a free ride and they should regard Libya as a wake-up call".

He actually refused to name which European allies were not playing their part but, as The Mail notes, his remarks will have been noted in Germany which, despite being one of the richest countries and having a large military, has refused to contribute troops.

However, it has to be said that, the last time Germany played an active part in Libya, it was under a general called Rommel (pictured). And despite the US even then supplying some of the equipment (see M-3 half-track in the foreground), we spent not a little time and money kicking them out.

Perhaps that is why Germany is not keen to repeat the experience.