If we were so minded, we could take The Independent headline and its story and rewrite them, better to reflect the reality. Rather than say that a question mark now hangs over Cameron's judgement, however, we would have to resort to the use of rather more words. Thus might we say:


After years of stumbling around in the dark, ignoring the self-evident and blindingly obvious fact that Cameron's judgement is and always has been suspect over a very wide range of issues, we have at last discovered that he is a seriously flawed man and have decided to present our discovery to you in the guise of "news", thereby assuming that you are so thick that you hadn't already noticed and that you need to pay us clever people to tell you.

Now, we admit that this does not have quite the same immediacy and striking power as a Sun headline. But then we am not clever like wot these professional journalists are, who are at the centre of things and know what's really going down.

On the other hand, we could say that the Fourth Estate, in now reporting that which most of the nation already knew, is having to deal the embarrassment of playing catch-up. And this is the best they can do.

Even when they slagged him off, the media couldn't get it right ... although the message was clear enough. Only the "top people" were deluded. The rest of us could see right through him.

What must be terrifying these little dears is that so many people had come to the right conclusion unaided, without the mighty MSM to guide them. The brighter ones may even be putting two and two together, realising that most people don't actually need their clever commentary in order to know what to think. 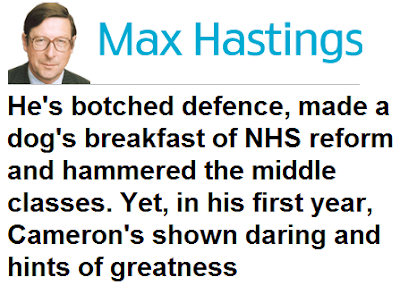 There is hardly a single journalist who comes well out of this. For instance. alongside the increasingly incredible Oborne, we have "Mad Max" Hastings, who in May was also turning on the goo factory about Cameron. And now, in defence of his own dismal lack of judgement, he writes:


The Prime Minister is badly damaged - and his demeanour yesterday showed that he knows it - because despite countless warnings he chose three years ago to appoint Andy Coulson as his director of communications, and also to establish a close relationship with Rebekah Brooks.

Even then, old habits die hard. They still do not understand that they are all tainted – not by the NOTW but by the fact that they took to their hearts a seedy, low grade individual like Cameron and lionised him.

Even the best of them, at some time or other, have fallen into the trap of adoring the posturing pretender, and they now – all of them – have egg on their faces. Even Gobshite Goodman is looking more moronic than usual as his hero crashes and burns.

And still, they chase after that single, elusive thing that they all strive after: setting the agenda, seeking to shape and control the debate. That, they think, is where their power lies – not as yet realising that the world has changed forever. They, like the Tories, have lost their authority and with it their monopoly control of information. They are just another set of squeaky voices in the growing cacophony.