Not fit for purpose 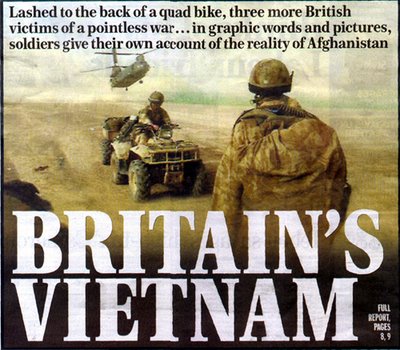 It was only on Tuesday last that I ventured that, if we had a grown-up opposition, the situation in Afghanistan would be the main issue in the Conservative Party Conference.

However, it took no great insight to express doubt as to whether that would be the case and, from the Boy King's opening speech in Bournemouth yesterday evening, that doubt was entirely warranted.

It always used to be the case that Eurosceptics were called "little Englanders" but the term was misapplied. Yesterday, though, the Boy King could easily have carried the label, such was the narrowness and claustrophobia of his speech. It so lacked in breadth of vision that, by comparison, a Mayor of Frinton-on-Sea setting out a programme for upgrading the town's public lavatories would have taken on the mantle of an international statesman. 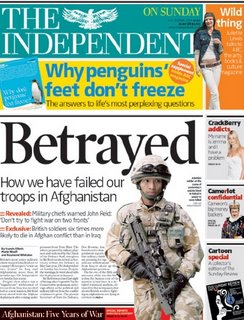 In no sense, at any time, did we get any impression that Camoron's was a speech from a potential national leader, much less the leader of a nation at war.

In anticipation of his failure to deal properly (or at all) with Afghanistan, therefore - and not expecting anything from the MSM - it was in my Tuesday piece that I had focused on the political bloggers. Having remarked on their propensity to dwell on the same vacuous trivia that marked out the political commentators in the MSM, I boldly remarked that they could – collectively – continue to play their little games or they could show up the media and the politicians and make the running.

Not to any great surprise, though, the "blogosphere" failed the test, demonstrating that British writers have some way to go before their acquire the gravitas and political weight of their US cousins. For a generation weaned on "Neighbours" and "Corrie", breaking away from the soap opera was too much to expect. Appeals for adult behaviour were never going to elicit much more than pained squeaks and a certain closing of ranks.

Strangely though, the very institution that did deliver the goods – thus slicing through the pretensions of the blogs – was the MSM, in the form of two newspapers, the Mail on Sunday and the Independent on Sunday. With the Mail declaring "Britain's Vietnam" and the Independent screaming, "Betrayed", both newspapers set out in graphic detail the dangers and privations to which our troops are exposed, 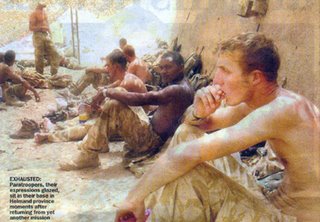 And, reflecting our own views, The Independent concludes, on the basis of MoD documents leaked last week, that Britain must choose between Afghanistan and Iraq. If it does not, we risk failure in both.

That risk of failure, we believe, is real, and the consequences catastrophic. A country that cannot even take on the Islamic extremists in their own country, with all the advantages of modern firepower and equipment, will have lost any international credibility that it might otherwise have gained. Thus, these two newspapers are to be congratulated on raising the issue.

As for British political blogs, they may grow up some day. Such a feat, however, seems beyond Camoron. For all his prating about "social responsibility", his first and greater responsibility, in the unlikely event that he ever becomes prime minister, is the security of this country – something he shows no sign of recognising.

Until he shows that he does understand this, this blog will consider than one of its responsibilities is to do whatever it can to prevent the Boy King getting his hands on the reins of power. He is not fit for purpose.