When France lost the propaganda war 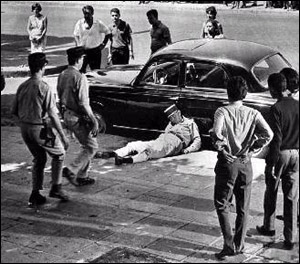 French historical memory tends to be even more selective than that of other European countries with the exception, possibly, of Russia and Serbia. (I am stretching the adjective European as far as it will go.) In other countries different memory lapses occur on different political sides and, somehow, one can put evidence together.

In France there tends to be an agreement as to the national memory lapse, inspired all too often by the state-controlled media (though the newspapers, not controlled by the state, gleefully join in).

Those old enough will recall the appearance of Marcel Ophüls’s “Le Chagrin et la pitié” in 1969, the first attempt to look at the truth of the Nazi occupation of France, the reality behind the carefully constructed myths. There was an explosion of officially orchestrated wrath. The film was banned from the state-controlled TV and various cinemas that displayed an inclination to screen it received unambiguous warnings.

Eventually the film was shown to great acclaim, in France and elsewhere, and a shocked discussion followed, especially among the younger generation, who felt, rightly, that they had been brought up on lies.

For all of that, the national amnesia over France in World War II has not yet been overcome to any great extent. (Come to think of it, Eric Rohmer’s recent film that attempted to show the truth about the French Revolution, “L’Anglaise et le duc”, was attacked ferociously by les biens pensants. Do not criticize our revolution.

The biggest memory hole is French decolonization, in particular the two ferocious and catastrophic colonial wars: Vietnam and Algeria whose after-effects are still with us.