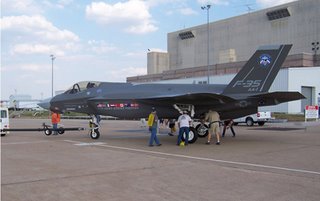 You can follow the ins and outs of the EU-Turkish accession negotiations for all you are worth but, as we have remarked several times on this blog, the real bellwether is the military. If you want to know where sentiment lies, watch what the military does.

And the military have just spoken. Against the heady days last year when the "colleagues" were looking to a quick sale for the Eurofighter, Turkey's Air Force has just selected the US-led F-35 Joint Strike Fighter (JSF), now called the Lightning II. They are expected to commit around $10 billion to buy about 100 new-generation fighter aircraft.

The Air Force, as the user, is not the sole authority for a final decision, but its position is dominant and backed by the powerful General Staff. "Although this decision is not official yet, we can say that Turkey's JSF move is almost final, after the Air Force has clarified its position," said one defence analyst in Ankara.

As a sop to the Europeans, there was a possibility of going for a mixed buy of the JSF and the Eurofighter, but the Air Force, whose fighter fleet is exclusively of US design and which follows a strong American tradition, has opted for the all-JSF solution.

So the Europeans can put their aeroplanes where the sun doesn't shine.