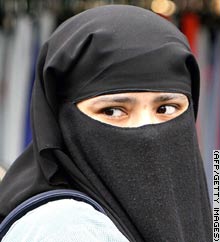 These postings seem to multiply in an amoeba fashion but choosing sides is something we all have to do internally as well as externally.

Several stories have come up in the last couple of days that require a certain amount of comment. The Evening Standard today reports two cases of licensed minicab drivers being fined for refusing to take guide dogs in their cars. The reason given was that, being Muslims, they find dogs dirty and offensive.

One of the ladies who was refused to be taken in a cab, which had been summoned by the BBC after she had appeared on News 24, Jane Vernon, complained to the owner of the minicab firm, who, apparently, told her that she should show more respect for other people’s culture. She, in turn, pointed out that the driver had shown no respect for her disability.