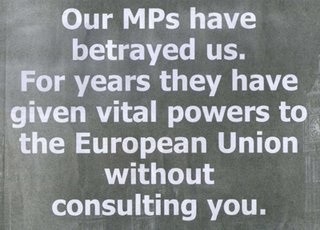 So, today is the day that the great Paul Sykes campaign starts – with his full page adverts in the newspapers and the new, all-singing, all-dancing website.

You would have thought that his gifted but anonymous team might have put the adverts up on the website, but such innovation is not for our Paul – leaving us to scan in part of one ad (pictured).

Sykes has called his campaign speakout but there seems to be very little of that going on today. Instead, the show – such that it is – seems to have been stolen by the rival Open Europe which is running the results of a poll which claims to show that most businesses think the cost of implementing EU regulations now outweighs the benefit of the Single Market.

There was a time when I might have been quite interested in such a finding but no longer. Purple Scorpion, however, makes a creditable job of evaluating it.

Left unsaid though is the thought that the Open Europe survey coming out on the same day as the Sykes campaign start might not be a coincidence but, rather, a deliberate spoiler. Certainly, it gave the Beeb the excuse it needed to ignore Sykes, running with Open Europe on the morning’s Today Programme and then again in the evening with Eddie Mair’s PM Programme.

There, the loathsome Mair enlisted the aid of EU trade commissioner Peter Mandelson to deal with the “concerns” of business. For Mandelson, EU regulation was intrinsically good as a single set of law underpinning the Single Market, disputing the findings of the poll as being designed by the “No to Europe campaign”. Try as they might, Open Europe cannot even get the commission to take it seriously.

But one has a little difficulty finding Mendelson credible either – it is he, supposedly knowledgeable in the ways of the EU, who claims that small and medium enterprises are not affected by EU legislation and therefore are unqualified to comment on it.

This is perhaps something that Sykes can take up although do not hold your breath. His arguments are riddled with errors, something pointed out by Yorkshire MEP Richard Corbett, who has already taken the campaign to task for its inadequate research effort.

One hates to agree with a Labour MEP but, clearly, the more urgent target is Mandelson, who desperately needs to be told how the EU works. Will we, I wonder, find Corbett speaking out on this?