Much ado about nothing 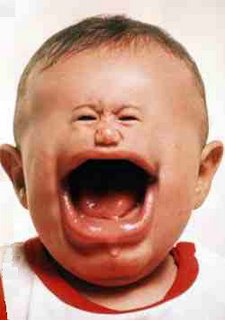 So dire has The Times become these days, especially where news on the European Union is concerned, that we tend to ignore it on the blog, except to correct the more egregious errors.

Even then, so obviously a non-issue was a recent item headed, "Amateur 'video bloggers' under threat from EU broadcast rules", that we did not consider it worth a mention – that is until some ill-informed, lightweight commentators in the UK rather misled our US cousins into raising the wholly unwarranted alarm.

The big deal according to The Times article was that an EU directive could extend broadcasting regulations to the internet, hitting popular video-sharing websites such as YouTube. The "European Commission proposal", we are told, would require websites and mobile phone services that feature video images to conform to standards laid down in Brussels.

And, to gild the lilly to a level of polished perfection, The Times then added that, "Ministers fear that the directive would hit not only successful sites such as YouTube but also amateur 'video bloggers' who post material on their own sites. Personal websites would have to be licensed as a 'television-like service'." 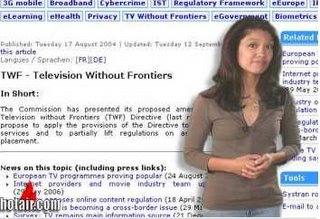 This latter claim, on licensing, is about as accurate as the piece yesterday on fishing – i.e., not at all. The commission is very careful to state that nothing in its proposals, "should require or encourage Member States to impose new systems of licensing or administrative authorisation on any type of media", which knock the more alarmist assertions into a cocked hat. We can understand the delightful Michelle getting this wrong, but the amateurs this side of the pond have no excuse.

Anyhow, what we are dealing with here is the so-called "Television without frontiers" - more prosaically, COM(2005) 646 final, published on 13 December 2005 detailing a proposal for a:

Directive of the European Parliament and of the Council amending Council Directive 89/552/EEC on the coordination of certain provisions laid down by law, regulation or administrative action in Member States concerning the pursuit of television broadcasting activities.

Perversely, the amendments are in fact largely deregulatory – relaxing certain common provisions which apply to television advertising throughout the Community. Where they bite, however, is in bringing for the first time internet services into the maw of community law.

Even then, there is a major distinction made between what are known as "linear" services – i.e., scheduled broadcasts on the net – and "non-linear" services. The latter is material available on the net but downloaded by users at their discretion and at times of their choosing.

For the linear material, the effect on any of the UK sites is likely to be minimal – controlling only the nature of the advertising that can be broadcast. And, for non-linear, it is hard to discern what, if any effect, there will be – so slight will it be. The "media service provider" will be required to supply a geographic and e-mail address, "which allow him to be contacted rapidly in a direct and effective manner" and, as far as content is concerned, the Member States is directed to:

...take appropriate measures to ensure that audiovisual media services under their jurisdiction are not made available in such a way that might seriously impair the physical, mental or moral development of minors.

...ensure by appropriate means that audiovisual media services and audiovisual commercial communications provided by providers under their jurisdiction do not contain any incitement to hatred based on sex, racial or ethnic origin, religion or belief, disability, age or sexual orientation.

Although some alarm has been expressed at these provisions, they already apply at national level and, should the directive come into force, there will be absolutely no change in the law.

What is of concern is to the constitutional wonks - instead of being generated entirely by the nation states, the law now rests on an EU directive. This is another small but important power grab by the EU, albeit one that has no immediate (or any) practical effect.

We should, of course, be concerned at the EU's gradual encroachment on our law-making, but that was not in the minds of those who first raised the alarm earlier this week. Their concerns were more shallow, selfish and altogether ill-founded, based solely on an inaccurate report in the MSM. They were, in fact, much ado about nothing.

How interesting it is though that some sections of the blogosphere, so dismissive of the MSM, are ready to take its reports at face value, without doing their own fact-checking.