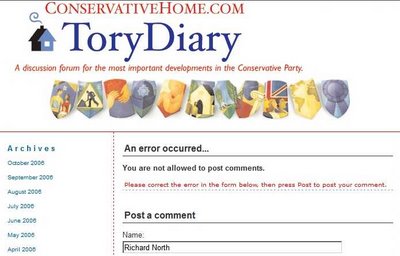 Interestingly, the piece about which I attempted to comment was on the Green Moron's speech, which started:

Begins with Boris Joke - apparently DC doesn't mind if people go off message - what an encouragement to ConservativeHome!

Apparently though, Conservative Home does mind if people go "off Message".

The smart way to keep people passive and obedient is to strictly limit the spectrum of acceptable opinion, but allow very lively debate within that spectrum – even encourage the more critical and dissident views. That gives people the sense that there's free thinking going on, while all the time the presuppositions of the system are being reinforced by the limits put on the range of the debate.

Sort of sums up the Tory condition really.