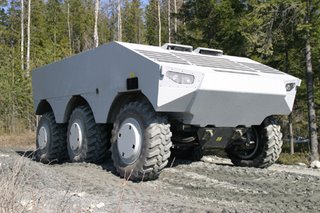 Should we give half a cheer that at least one newspaper has picked up on Dannatt's plea for more resources to be devoted to the armed forces, or will this have no more effect than any of the tons of fish and chip wrappers produced each day?

Well… a micro-cheer – if there is such a thing. But, while the world's favourite newspaper (not) has come up with a stunningly obvious headline declaring that, "Winning the war will need more" – the problem is that the nature of "more" is not specified. What we do get though is this:

For the foreseeable future, the Army's basic task will be to defeat hit-and-run insurgent groups in hostile terrain. Yet the priorities for the defence budget are still geared towards frustrating an attack by the Soviet Union on Western Europe. A very substantial slice goes on our nuclear deterrent; more still will go on updating it. Some £18 billion has been expended on our share of the Eurofighter: a plane that still does not work properly, and for which no military function has been found.

The "peace dividend", the pot of gold politicians so love, has long since disappeared. We face a prolonged war against an implacable enemy. Mr Blair has recognised the threat. He, and his successor, now need to provide the resources our Armed Forces need to defeat it.

Clearly, the egregious hacks on The Sunday Telegraph did not fully read the Sarah Sands piece in the Mail (which is hardly surprising as most of them have been fired) but, had Patience given it to the dog, he might have reminded her of this:

What will make a difference is the arrival of more heavily armoured vehicles. Sir Richard is open about the vulnerability of some of the vehicles his soldiers have been using, particularly in Iraq.

"The threats we have been facing in Iraq from last summer grew considerably. The sophistication of the mines and rockets used to attack our vehicles went up significantly."

Thus, 160 six-wheeled, four-ton armoured patrol vehicles are on their way to Afghanistan. There is also a 20-ton vehicle called the Mastiff ready for use in Iraq or Afghanistan. The controversial "snatch" Land Rovers, which give little protection, should be replaced. "Over time I want to modernise all patrol vehicles," says Sir Richard. "The snatch vehicles were getting old. They were originally developed for Northern Ireland. I want people to have adequate vehicles for the tasks they carry out." There is also a family of armoured vehicles called FRES (Future Rapid Effect System). The cost of this future equipment is £14 billion.

And there it is. Dannatt, like his predecessor Jackson, is committed to FRES – with a price tag of £14 billion – the biggest single procurement programme for the Army ever devised.

Is anybody out there? FRES, i.e., Future Rapid Effects System, is the biggest single procurement programme for the Army ever devised.

This is not "geared towards frustrating an attack by the Soviet Union on Western Europe" but neither is it suitable for defeating "hit-and-run insurgent groups in hostile terrain." In fact, its primary purpose is to equip the European Rapid Reaction Force, the function of which is unknown – other than to pursue the "colleagues'" ambitions for further defence integration.

It is all very well taking a cheap shot at the Eurofighter (the only thing cheap about it) but the money is spent – or committed. It would cost us more at this stage to cancel the contract than buy the aeroplanes, unless we can dump more on the Saudis.

But when it comes to FRES, we are talking about the future – decisions yet to be made. And not for nothing have we called it a blunder of Eurofighter proportions with serious political implications.

There is still time to reverse course and equip the Army to deal with "hit-and-run insurgent groups", but that is not going to happen unless the media (to say nothing of the politicians) start waking up and discussing forward plans instead of ancient history.