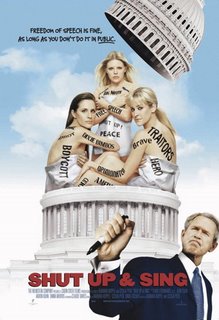 No, I do not mean the Dixie Chicks and their moronic “Shut up and sing” (if only!). Their “blacklisting” and claims of victim status are even more preposterous than those of the famous Hollywood Ten (every one of whom was a Communist and lied about it and every one of whom went on being employed in the film industry in the States or Europe) and their acolytes. The Dixie Chicks and their supporters appear to think that if people do not buy their records for whatever reason, their constitutional rights are under attack. Otherwise, I cannot quite see how they were “blacklisted”, given the amount of publicity the wretched group received on both sides of the Pond.

Rehov is a French-Algerian film-maker who risked his life to make “Suicide-Killers”. He went into the terrorist training camps, interviewed the would-be killers, talked to their families and to those who had failed and were in Israeli prisons.

This astounding documentary shows first-hand that terrorists are created not by Israeli or American foreign policy, but by the repression, lack of democratic freedom, and poverty of Arab societies.

Not, perhaps, surprising to many of us but worth saying and worth documenting. The courage of this man is quite astonishing. 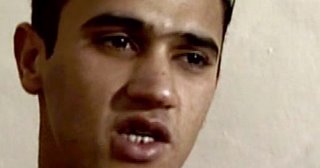 He has made another film, called “From the River to the Sea” in which he looks at the Palestinian claim to Israel but, more than that, documents the treatment of Palestinian by other Arab states and by their own leadership; talks about the huge amount of money stolen from the Palestinians (nobody even mentions Arafat’s widow and other friends and relations of the late unlamented Chairman):

From the River to the Sea is an eye-opening documentary about how the UN and Arab nations surrounding Israel have conspired to keep Palestinians in refugee camps without jobs, citizenship, or opportunity, thereby encouraging them to turn to terrorism against Israel. The film features shocking footage of Palestinian terrorists escaping in UN vans, and explores the controversial issue of “right of return.” It also documents the shocking corruption of UNRWA and the PLO in robbing hundreds of millions from Palestinian refugees, and reveals the anti-Israeli, anti-Jewish propaganda that is taught to schoolchildren in UN-funded schools in Palestinian camps.

I have only one question. How soon will a courageous British cinema or film festival run either film if only in order to open a discussion?