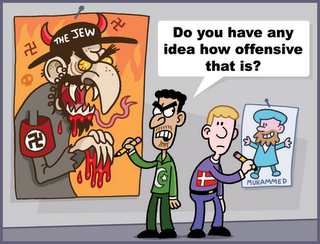 Well, really, one can’t help being entertained by the antics of the left, be it in the artistic or the political worlds. Those obnoxious producers and artists who are always prattling on about their right and duty to “scandalize” the “smug bourgeoisie” are finding (in the Berlin Opera and the Whitechapel Art Gallery, among other places) that they desperately need the “smug bourgeoisie” to protect their rights to “scandalize”.

When, instead of the mild protests of the Christian churches and organizations or of the Jewish representatives, they are threatened by people who do not believe in the right to scandalize or even the right to produce works of art, there is a general scampering for safety. Operas are pulled from production, exhibitions are closed down. And it is left to us, sad and smug bourgeois that we are, to protest and to say that artists should have the right to express themselves, though whether the taxpayer should be endlessly paying for lack of talent, ability and taste is another matter.

Now we have another story from Denmark. The latest “cartoon scandal”, this time in the form of a webcast, that, inevitably, provoked a great deal of anger among the followers of the religion of peace (well, those of them who could be persuaded to go for another rampage, that is) and encouraged the Danish Foreign Ministry to issue a warning to Danes not to travel to certain Middle Eastern countries, appears to be a little more complicated than first thought.

It seems that the webcast, which was purported to be that of the right-wing Danish People’s Party, was, in fact, made by a group of left-wing “artists” who had infiltrated the party in order to discredit it.

Now they are having problems. The youths in the video, which does appear to be rather distasteful, are in hiding.

The video was produced by an artists' group, Defending Denmark. In a message posted along with the video, the group said it had infiltrated the Danish People's Party Youth, known as DFU, for 18 months "to document (their) extreme right wing associations."

"This is not an example of something that is meant to provoke. This is an example to show how things are in Danish politics," artist Martin Rosengaard Knudsen told Danish public radio.

The clip was removed from that broadcaster's Web site Monday, as well as from the Nyhedsavisen newspaper's site. The purpose of the original publication was "not to insult Muslims or expose any members ... to any danger," said the paper's editor, David Trads.

A party official reportedly said that two youths seen in the video clips had gone into hiding.

There is no indication in the news report as to whether they are members of the infiltrating artists’ group but I sincerely hope so. The webcasts have been removed from various websites and we have a great deal of whining from the artists in question who didn’t mean to upset anyone (well, apart from the right-wing Danish People’s Party), honest, guv. Sad, isn’t it.