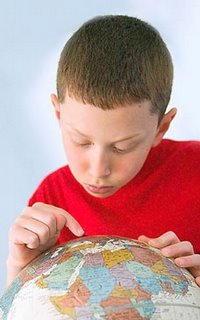 One in five (British) schoolchildren is unable to find the United Kingdom on a map of the world.

That we now know, courtesy of The Daily Mail, which records the results of research carried out by National Geographic Kids magazine.

Furthermore, one in ten, it seems, cannot name a single continent and more than 20,000 children in London do not realise they live in England's capital city. Education experts are describing the findings as "rather frightening", saying schools must concentrate on the basics in geography lessons.

In a way though, I find this strangely comforting. Kids who don't even know where their own country is and have difficulty in identifying continents are hardly going to get worked up about needing more "Europe" to govern them.

Indifference, more than anything else, is likely finish off the grand project, something about which I am happily reminded when I talk to schools about the European Union. Of the now several thousand students I have addressed, not one has yet been able to tell me that 9 May was "Europe Day".