Death of another courageous journalist 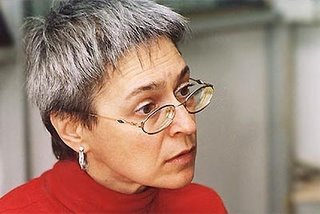 Well, they finally got her. Anna Politkovskaya, one of the world’s most courageous journalists, who wrote openly critical pieces about President Putin and his system, who managed to get through to Chechnya and report truthfully about the war there, who was nearly murdered when she was trying to get to Beslan to find out what was really happening in that unfortunate place, has been assassinated.

Her body was found by the lift of the apartment block she lived in, with a gun and ammunition beside it. According to Russia-IC the investigation into the murder “is being led by the General Procuracy of Russia under personal control of department's head Yury Chayka”.

Her husband expressed the opinion that he did not think the murderers would be found, which is quite likely, unless the General Procuracy can find some little minnow in the conspiracy who can be blamed. Mr Politkovsky has also said that his wife had been receiving threats for the last two years. It is not clear, says the news agency, whether she had reported these threats to the police. I can think of several reasons why Anna Politkovskaya might not want to deal with the Russian police in this matter.

This blog has written about this extraordinarily courageous woman before, mentioning the Leipzig Prize for the Freedom and the Future of the Media, which she shared with Hans-Martin Tillack, Britta Petersen and Seymour M. Hersh. Even Herr Tillack’s travails pale into insignificance (well, almost) compared to the life and death of Anna Politkovskaya. The other two recipients are alive and well with Mr Hersh being feted up and down the “drive-by media” of the United States.

There are words of horror being expressed by various journalists’ organizations but, as we have pointed out before, it is not always clear that the biggest and most important of these, the International Federation of Journalists has a clear idea of what is really going on in the world. I suggest they compare the events in Anna Politkovskaya’s life to those in Seymour M. Hersh’s. It is entirely possible that they will not be able to see the difference.

For those of us who would like to see Russia take her rightful place as one of the truly great countries in the world this assassination, coming so soon after the assassination of Andrei Kozlov, Deputy Chairman of the Russian Central Bank, who was trying to clean up the banking sector, marks another tragic and bloody step downwards for the whole country.