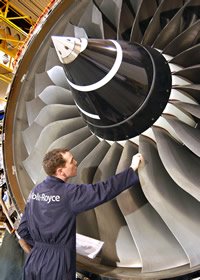 The shock waves from Airbus's incompetence continue to ripple through the system with The Times and others reporting that Rolls-Royce is suspending work on its Trent 900 engine used to power the A380.

The company, we are told, now expects to deliver only 28 of the £10 million engines this year and none next year. Rolls-Royce says it will be reviewing whether any job cuts will be necessary when further clarification on the A380 programme was given by Airbus.

Airbus Chief Executive Christian Streiff, however, does not have that luxury. He has announced the launch of an Airbus revival strategy called Power 8, which will involve a 30 percent cut in costs, primarily from job losses.