A veil of tears 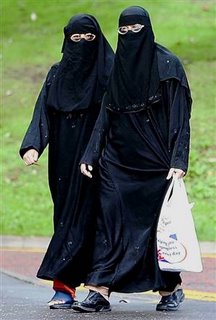 It does say something of British newspapers that not one of the main nationals carries a report of the Blair statement on equipment for the British Army, while all of them offer lengthy analyses and updates on the Straw statement on Muslim women wearing veils.*

As you might expect though, the most fatuous offering comes from the Independent on Sunday which has Straw accused of "unleashing a racist backlash against Britain's Muslims".

The paper also cites Peter Hain, the Northern Ireland Secretary, saying that women should be entitled to wear the veil if they chose. "I believe that women, like everybody else, are entitled to dress as they choose to dress," he said on BBC Radio 4's Any Questions.

And Shahid Malik, Labour MP for Dewsbury, is cited as saying that "I think Jack may have unleashed forces more negative and corrosive than he anticipated… I think there is a growing feeling among Muslims in Britain that something has got to give. They are genuinely fearful of attack."

The point about the "racist backlash" of course is that the Muslims' religion is independent of any nationality or race. For anyone to object to women wearing a veil, therefore, is hardly evidence of a racist backlash.

As for the rest, there can be no doubt that British women who wear the veil are making a political statement, in effect declaring that they place their values above those of the country in which they live - thus rejecting any idea of integration.

* This is based on the electronic editions. The print edition of The Sunday Telegraph did carry a brief story on the Blair statement.