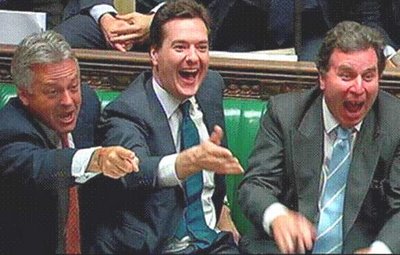 If there was ever an image which was calculated to turn people off politics, it is this, culled from a national newspaper today – illustrating the merriment of the Tory front bench at the prime minister’s discomfort over the "cash for honours" issue.

It was precisely this sort of "Punch and Judy" politics which the Boy King pledged to leave behind. Yet here are three senior members of his shadow cabinet, Alan Duncan, George Osborne and Oliver Letwin, behaving for all the world like schoolchildren.

The chaps may have come away from yesterday's Prime Ministers' Questions feeling terribly pleased with themselves but they should be aware that the rest of the nation looks upon their puerile antics with a mixture of loathing and contempt.

And this, incidentally, is the same day that we hear that a Tory MP and close political ally of the Boy King has left his wife and three children for a man.

When a nation is at war and its troops are in harm's way, masculine values usually come to the fore. But, it seems, we are wasting our time expecting these from our current parliamentary opposition. We must look elsewhere.