The EU is non-judgemental 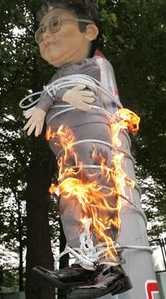 The North Korean nuclear test or what has passed for it seems to have united the world in condemnation and bewilderment. (Well, to be fair, we have not heard from Hugo Chávez yet but he is busy trying to work out why his opponent manages to collect more supporters than he does and what to do about it.)

Otherwise, everyone has reacted negatively: not just Japan and South Korea but China, not just the United States but Mohamed El Baradei, Director General of the IAEA (another success story for last year’s winner of the Nobel Peace Prize); even Iran has sort of criticized North Korean behaviour, pointing out that Iran wanted a world “free of nuclear weapons”.

Amongst this widespread chorus we can hear the voice of the European Union as well. The Presidency has issued a statement in which it condemned in the strongest terms the North Korean nuclear test as it was in defiance of various international agreement, many of them signed by the DRNK (probably in a fit of absent-mindedness or a desire to pocket the bribe that was being offered at each agreement).

Well, now, what is the EU going to do apart from making statements? I know, I know, what is anybody going to do? But the EU speaks for all of us and, more to the point, spends our money in a somewhat profligate manner.

It seems that the one thing it is not going to do is to stop aid to North Korea.

Benita Ferrero-Waldner, the EU's external relations commissioner, stressed that the test was "unacceptable,'' but said there were no plans to cut humanitarian aid to Pyongyang, which has already been reduced to €10 million (US$12.6 million £6.76 million) this year from €21 million in 2005.

Well, the first thing that needs to be pointed out is that this is not exactly a princely sum. Let me add, hastily, that I do not think that it should be increased.

Secondly, the aid goes to Pyongyang, the capital of the Democratic Republic of North Korea (the usual rule about anything that has the word “democratic” in the title applies). Does it ever go out of Pyongyang? Does it, in fact, ever go outside the close circle of the Dear Leader, Kim Jong-il and his friends and relations? Somehow I doubt it. How much supervision is there from the EU and ECHO (European Commission Humanitarian Office) over the money that is blithely being handed over? How much auditing or accounting?

The people of North Korea are among the poorest and most wretched on this earth. They rarely rise much above famine level while their tyrant entertains himself lavishly and constructs (possibly) unnecessary nuclear weapons. Or, for that matter, highly expensive other weapons.

What is it that enables Kim Jong-il to lead his science-fiction type existence while his countrymen suffer and perish? Could it be western money, sent over as humanitarian aid? I cannot believe that he gets much from the likes of George Galloway and the leaders of the Stop the War Coalition, all of whom have made various pronouncements in support of the North Korean political system (as long as it does not come anywhere near them).