They can't help it 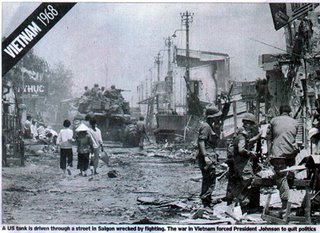 One might have expected more to have been made about Bush's supposed admission of a parallel between Iraq and Vietnam. Certainly, The Telegraph has milked it for all it is worth, with a heading, "Bush stalked by spectre of failure in Vietnam".

Just to put Bush's statement in perspective, however, what he actually said emerged when he was asked of he agreed with an opinion by New York Times columnist Thomas Friedman that the current violence in Iraq is "the jihadist equivalent of the Tet offensive," noting also the electoral parallels, Bush said, "He could be right… There's certainly a stepped-up level of violence, and we're heading into an election."

This did not stop the Telegraph running an op-ed from John Keegan proclaiming: "Bush is wrong: Iraq is not Vietnam" but, if it really wants pole place in the "wrong" stakes", the newspaper should look to its own pictures. 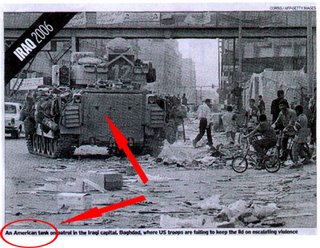 So keen is it to draw a parallel between the two periods that it shows a black-and-white photograph of a US tank in Saigon, artfully juxtaposed with a contemporary picture of an American tank in Baghdad. The only problem though is that the "tank" is a Bradley infantry combat vehicle.

This is far from a matter of pedantry. There is a quantum difference in scale between putting tanks on the streets and tracked personnel carriers. What the paper is trying to show pictorially simply does not stack up – and neither does the text. For a supposedly conservative paper, this has more a 60s hippie-left feel to it. But then the paper is probably now run by that generation, so they probably can't help it.

Either way though, it is cheap, shoddy journalism (although the Telegraph will no doubt want 2 x £70 for the use of the photographs).