Now pull the other one 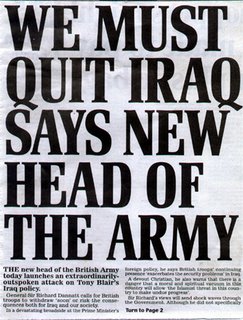 Front page of the Daily Mail would have us believe that the newly appointed Chief of General Staff, General Sir Richard Dannatt has launched a "devastating broadside at Tony Blair's foreign policy" in calling for British troops to withdraw from Iraq "soon" or risk the consequences for both Iraq and our society.

His views, declares the Mail - given in an "exclusive interview" - will send shockwaves through government. "They are a total repudiation of the Prime Minister, who has repeatedly insisted that British presence in Iraq is morally right and has had no effect on our domestic security."

As always, though, this is looking-glass politics. If the hacks and editorial staff the Daily Mail stopped to think for more than one second, they would appreciate that a newly appointed CGS does not take on the government and contradict its foreign policy. And nor has he.

Within the Army, it has long been the view that neither the nation nor the armed forces have any appetite for the continued adventure in Iraq. Furthermore, it is an open secret in Whitehall that British policy is to withdraw from Iraq as soon as humanly (and politically) possible.

To that effect, Dannatt is simply preparing the ground for that eventual withdrawal, acting entirely in accordance with government policy and intentions. Hence his willingness to be interviewed by the hacks on the Mail. 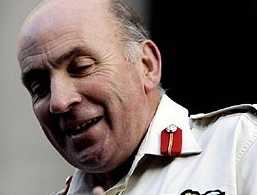 The only puzzle is whether the Daily Mail actually believes the guff it has written and, if it does, whether we are stupid enough to believe it. On balance though, it is probably the former. It has commissioned a long piece from Sarah Sands, who has only recent moved over to join the Mail after doing her best to wreck the Sunday Telegraph. Her piece is headed, "Sir Richard Dannatt: A very honest General," but it could just as well be headed, "Sarah Sands: A remarkably stupid woman".

However, the dead tree media have filled a little more space, the BBC Radio 4 Today Programme has waffled a bit more and an avalanche of ill-informed comment has been triggered. None of us are any the wiser, except EU Referendum readers – but then you knew that already.