This is the future… 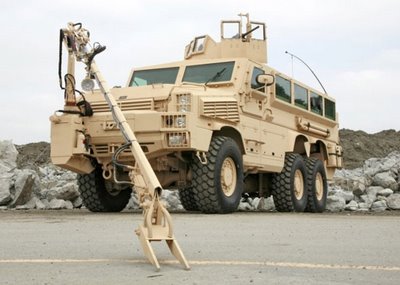 In the great tradition of the free-enterprise de Haviland Mosquito fighter bomber of World War II, BAE Systems has this week unveiled a completely new armoured vehicle, a 6x6 Mine-Protected Vehicle, to be known as the RG33L.

This has been developed in-house using the latest in design, modelling and simulation tools in Benoni, South Africa and in Santa Clara, Calif. It is claimed to offer more volume under armour than any other C130 transportable mine protected vehicle and incorporates the latest designs in protecting against improvised explosive devices and is equipped with a hydraulic ramp, a gunner's protection kit, a robotic arm, survivability gear, and dedicated space for equipment stowage. In addition, the vehicle is remote weapon capable and network enabled.

The RG33L also features additional systems to enhance survivability, such as modular add on armor kit provisions, TRAPP transparent armour that provides excellent visibility and situational awareness, and run-flat tyres. The vehicle is equipped with multi-positional mine protected seating and air conditioning. 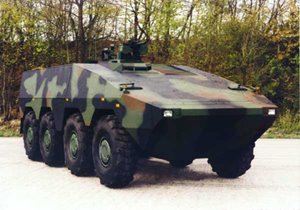 Left to themselves, the armies of this world would still be looking at generations of armoured vehicles with their design principles stemming from the 60s – as indeed is the European Defence Agency with the pan-European Boxer (right) – and the British Army is still floundering around with the FRES concept and lightweight armoured vehicles.

This BAE Systems concept, however, is the future. While the Europeans are still bogged down in their outdated plans for air-portable rapid reaction forces capable of fighting a conventional war, it is to the RG33 type of vehicles that Sir Richard Dannatt needs to be looking.